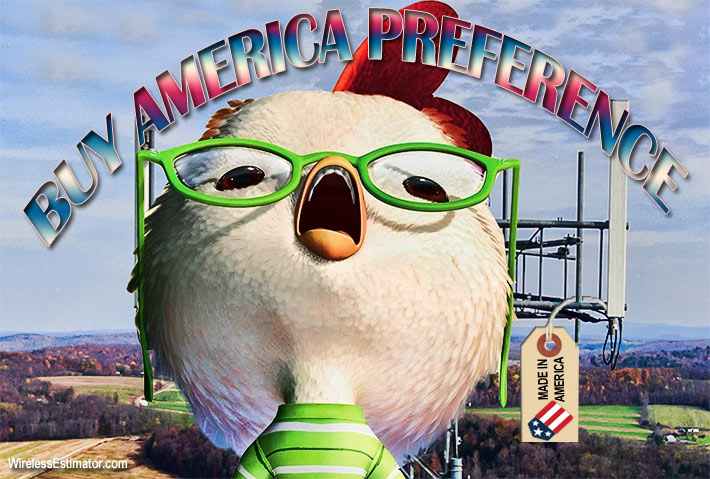 When two manufacturers interviewed by Wireless Estimator first learned of the Buy America Preference Act requiring them to buy all of their steel domestically and manufacture their products in the U.S., they thought it could be a serious threat to the wireless industry. But after a careful reading of the Act, they found the requirements to be acceptable. The Associated General Contractors of America believes the guidance makes no sense, especially since supplies are currently limited.

On Monday, the Biden Administration issued guidance relating to the “Buy America” sourcing requirements under the “Build America, Buy America” portion of the Infrastructure Investment and Jobs Act that will provide $65 billion in funding to build out America’s broadband.

For some manufacturers four years ago, this obligation could have been a major concern, but former President Trump, set extremely high tariffs that forced them to start purchasing steel domestically prior to President Biden’s mandate.

In 2018, the Trump administration imposed a 25% tariff on steel imports from many countries, including China, as a result of the U.S. Department of Commerce’s investigation on the effect of imports of steel on U.S. national security.

It forced manufacturers to start buying their steel from Nucor, U.S. Steel and other domestic producers.

“However, if the unionized steel companies keep raising prices it could be a problem,” said one major U.S. component manufacturer’s executive.

In addition, soaring freight rates for purchasing overseas steel has increased dramatically due to COVID-19 and vessel shortages. According to one manufacturer, the 18%-to-20% increase in freight could have been absorbed since U.S. steelmakers charged a higher premium, but the high tariff made U.S. steel options competitive.

“I don’t think this will affect us much, it actually may help us disqualifying other manufacturers,”said one major tower manufacturer’s sales representative.

That comment was echoed by an attachment hardware manufacturer’s representative who said, “All of our products are made here in the U.S. by U.S. workers. We do not have our products made overseas as some suppliers do so we will just need to be sure that our raw materials are sourced properly.”

“The only impact I could speculate is if other manufacturers switch securing raw materials from non-domestic to domestic sources.  This change in buying patterns could affect pricing and demand in the industry overall,” said another hardware manufacturer.

In years past, a large percentage of ancillary attachment hardware such as hanger kits, trapeze kits and other items were manufactured overseas, but that has changed, said one manufacturing executive who believes, as an example, “probably 75% or more of all hangar kits are now manufactured in the U.S.”

Waivers will be considered

The Act provides agencies with detailed guidance on the process for receiving, analyzing, publishing for public comment, and ruling on waiver requests.

The three essential waivers are:

(2) Types of iron, steel, manufactured products, or construction materials are not produced in the United States in sufficient and reasonably available quantities or of a satisfactory quality

(3) The inclusion of iron, steel, manufactured products, or construction materials produced in the United States will increase the cost of the overall project by more than 25 percent

According to the guidance, new or amended infrastructure programs must be aligned with the “Buy America” requirements by May 14, 2022.

The Associated General Contractors of America (AGC), wants to kick the guidance to the curb, calling it unrealistic “red tape” at a time of inflation and material shortages.

AGC chief executive Stephen E. Sandherr said: “It makes no sense to place unrealistic limitations on firms’ ability to source key materials at a time when prices for those products are skyrocketing, and supplies are limited.”

“Supply chain shortages are already prompting firms to avoid bidding on new projects, as the Army Corps of Engineers discovered on a recent project that received zero bids because of concrete scarcities in parts of the country.”

“Whatever minimal gains in domestic construction material production this new mandate might temporarily generate will be offset by the increased cost of constructing new projects, slower schedules to build those projects, and the fact some key projects could be hamstrung from moving forward.”

“Americans were right to be excited about the potential for the Bipartisan Infrastructure Law to make our economy more efficient, our commutes faster, our water safer and our economy stronger. But this new mandate will leave too many taxpayers wondering where the trillion dollars went while they are still stuck in traffic, still hearing about boil water orders and still wondering why we can’t have better transit systems,” said Sandherr.