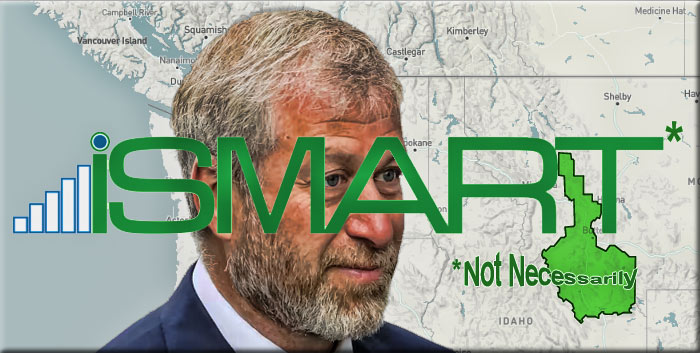 FCC OUTSMARTS ABRAMOVICH – The iSmart licenses in Montana have undergone a bewildering number of changes in ownership over the years, but the FCC said that at all times they have been illegally controlled by oligarchs Roman Abramovich, above, and his two partners. Abramovich is worth approximately $14 billion. The UK has accused him of being complicit with Russian President Vladimir Putin and has accused him of having the blood of the Ukrainian people on his hands.

The FCC has proposed a fine of $660,639 for London-based Truphone, the owner of iSmart Mobile, for exceeding the statutory limits of 25% for ownership by foreign individuals or entities tied to FCC licenses without FCC approval.

Roman Abramovich owns two homes in Colorado. The mega-mansion above is 14,000 square feet sitting on 200 acres in Snowmass, near Aspen. It’s valued at approximately $50 million. Both homes are listed in his name.

FCC Chairwoman Jessica Rosenworcel said the Commission in the wake of Russia’s invasion of Ukraine “launched an internal assessment of Russian ownership of telecommunications interests in the United States” and the fine against Truphone was a result of that review.

The agency said “it appears that Truphone’s failure to report truthful and accurate ownership information was egregious. As a result of Truphone’s failure, control of a U.S. common carrier passed to an unvetted foreign entity and associated individuals for more than seven years.”

Prior to the fine, Truphone said, “in light of recent global events, the board of directors has appointed FRP Advisory to support the company in an immediate review of its strategic options.”

FCC Commissioner Geoffrey Starks, in a statement, said the company has been indirectly owned by a small group of Russian oligarchs since at least 2011. He noted that with the importance of the internet and the shifting national security environment facing the U.S., “protecting our nation’s communications networks has never been more critical.”

The Russian oligarch ties to Truphone include Roman Abramovich, 54, and his business partners Alexander Frolov and Alexander Abramov.

While in his mid-20s, Abramovich started to amass his wealth when he seized the oil company Sibneft from the Russian government in 1955 in a reportedly rigged auction for approximately $250 million. He sold it back to the government in 2005 for $13 billion.

Abramovich, who has a net worth of about $14 billion, has been sanctioned by the UK and the European Union.

When the UK froze the assets of Abramovich and six other oligarchs, Foreign Secretary Liz Truss said, “With their close links to Putin, they are complicit in his aggression. The blood of the Ukrainian people is on their hands.”