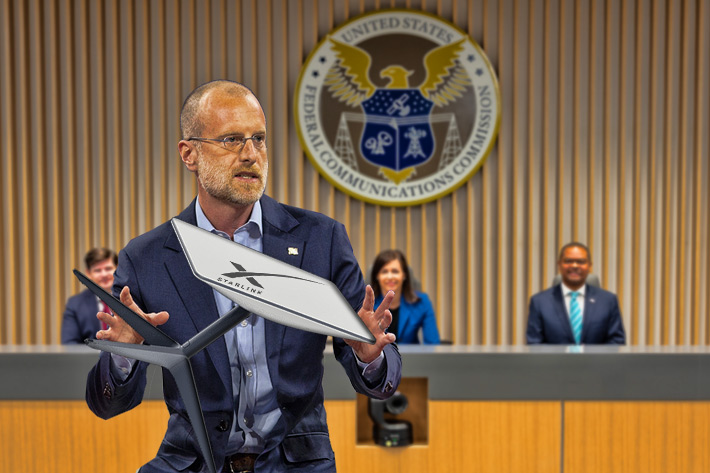 Commissioner Brendan Carr castigated the FCC’s decision to deny Starlink $885.5 million in funding. He said the FCC didn’t have the authority to make that decision and the move wouldn’t “withstand even casual scrutiny.”

FCC Commissioner Brendan Carr attacked a move by the FCC earlier in August to deny Starlink $885.5 million it won in the Rural Digital Opportunity Fund (RDOF) auction, stating: “I am surprised to find out via a press release – while I am on a work trip to remote parts of Alaska – that the FCC has made this significant decision.”

He said he “will have more to say because we should be making it easier for unserved communities to get service, not rejecting a proven satellite technology that is delivering robust, high-speed service today.”

And today, he came out with a critical statement regarding the agency’s abrupt reversal of the $885 million infrastructure award to Elon Musk’s Starlink.

As an initial matter, Carr said the reversal was a very curious outcome because the reasons the agency offered for backtracking on the decision do not “withstand even casual scrutiny.” He believes the reversal constitutes a clear error and exceeds the FCC’s authority.

“First, the FCC’s announcement claims that the agency is acting to ‘avoid extensive delays in providing needed service to rural areas.’ Yet that is exactly the outcome that this decision ensures,” Carr said in a statement.

“The FCC’s 2020 award to Starlink secured a commitment for the delivery of high-speed Internet service to 642,925 unserved rural homes and businesses across 35 states. By reversing course, the FCC has just chosen to vaporize that commitment and replace it with . . . nothing. That’s a decision to leave families waiting on the wrong side of the digital divide when we have the technology to get them high-speed service today.”

“Second, the agency decision casts aspersion on the Starlink system in turning heel on the Commission’s 2020 award—calling the technology ‘risky’ and ‘still developing.’ But those arguments do not bear out. To start, the one set of speed test data the FCC cites shows that Starlink’s speeds have increased significantly year-over-year, not decreased over that period. And in any event, the relevant speed benchmarks that the full Commission imposed in 2020 on Starlink and all other infrastructure award winners do not kick in for another three years. Particularly given the speeds Starlink is already offering and the pace with which it is continuing to launch satellites, the FCC’s decision offers no reasoned basis for determining that Starlink was incapable of meeting its regulatory obligations. In fact, Starlink is already exceeding those benchmark speeds in other countries where their services are online. Indeed, the skepticism the FCC expresses here is odd because it is in direct conflict with the confidence expressed by other components of the federal government—including the Air Force, which just inked a nearly $2 million deal with Starlink to deliver high-speed Internet service to military bases. In the end, this action reads as an untimely and improper effort to revisit the full Commission’s 2020 decision to allow satellite providers to compete for awards, rather than the limited review authorized,” Carr said.

Carr believes “the denial here is without a lawful basis.”

“We cannot afford to subsidize ventures that are not delivering the promised speeds or are not likely to meet program requirements,” FCC Chairwoman Jessica Rosenworcel said after the Commission denied SpaceX’s long-form subsidy application.

Carr said the decision reflects many of the same missteps the administration has been making as it implements federal broadband infrastructure programs.

The agency press release describing the recent Starlink decision can be found here.

Carr said today that the agency’s decision would cost extra money for taxpayers because it would cost at least $3 billion to bring fiber broadband to the areas that Starlink planned to serve for less than $1 billion.

Carr didn’t ask the FCC to take any specific measures to reverse its rejection., He advised the Commission to “correct course, adopt a technology-neutral approach, and in doing so ensure that we prioritize the needs of Americans that remain unserved today.”

The NTIA has previously stated that satellite broadband was unreliable. They have also noted that shelf life was limited for LEO satellites, and there was no guarantee of service past that period.