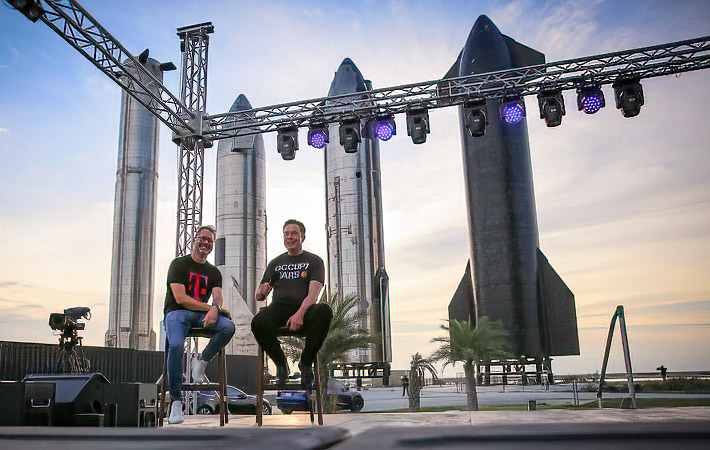 T-Mobile CEO Mike Sievert, left, and Space X founder Elon Musk made the announcement yesterday evening to provide ubiquitous coverage from space to anyone with a cell phone in most places in the U.S.

Sievert and Musk announced coverage to bring cell phone connectivity everywhere. Leveraging Starlink, SpaceX’s constellation of satellites in low Earth orbit, and T-Mobile’s wireless network, the carrier plans to provide near complete coverage in most places in the U.S. – even in many of the most remote locations previously unreachable by traditional cell signals.

Despite powerful LTE and 5G wireless networks, well over half a million square miles of the U.S. in addition to vast stretches of ocean are untouched by cell signals … from any provider. And as anyone who has ever encountered a mobile dead zone knows, the wireless industry has struggled to cover these areas with traditional terrestrial cellular technology, most often due to land-use restrictions (e.g. National Parks), terrain limits (e.g. mountains, deserts, and other topographical realities) and America’s sheer vastness.

In those areas, people are either disconnected or pay exorbitant rates to lug around a sat phone. SpaceX and T-Mobile share a vision where these uncovered areas are a relic of the past, and today, the companies are taking the first step to make that vision a reality, according to their press statement.

From the middle of Death Valley to the Great Smokey Mountains or even that persistent neighborhood dead zone, T-Mobile and SpaceX have the vision to give customers a crucial additional layer of connectivity in areas previously unreachable by cell signals from any provider. And the service aims to work with the phone already in your pocket. The vast majority of smartphones already on T-Mobile’s network will be compatible with the new service using the device’s existing radio. No extra equipment to buy. It just works.

“We’ve always thought differently about what it means to keep customers connected, and that’s why we’re working with the best to deliver coverage above and beyond anything customers have ever seen before,” said Mike Sievert, CEO of T-Mobile. “More than just a groundbreaking alliance, this represents two industry-shaking innovators challenging the old ways of doing things to create something entirely new that will further connect customers and scare competitors.”

“The important thing about this is that it means there are no dead zones anywhere in the world for your cell phone,” said SpaceX Chief Engineer Elon Musk. “We’re incredibly excited to do this with T-Mobile.”

To provide this service, the companies will create a new network, broadcast from Starlink’s satellites using T-Mobile’s mid-band spectrum nationwide. This satellite-to-cellular service will provide nearly complete coverage almost anywhere a customer can see the sky.

With this technology, T-Mobile is planning to give customers text coverage practically everywhere in the continental US, Hawaii, parts of Alaska, Puerto Rico, and territorial waters, even outside the signal of T-Mobile’s network starting with a beta in select areas by the end of next year after SpaceX’s planned satellite launches. Text messaging, including SMS, MMS, and participating messaging apps, will empower customers to stay connected and share experiences nearly everywhere.

Afterward, the companies plan to pursue the addition of voice and data coverage.

In addition, the CEOs shared their vision for expanding coverage above and beyond globally, issuing an open invitation to the world’s carriers to collaborate for truly global connectivity. T-Mobile committed to offering reciprocal roaming to those providers working with them to enable this vision.