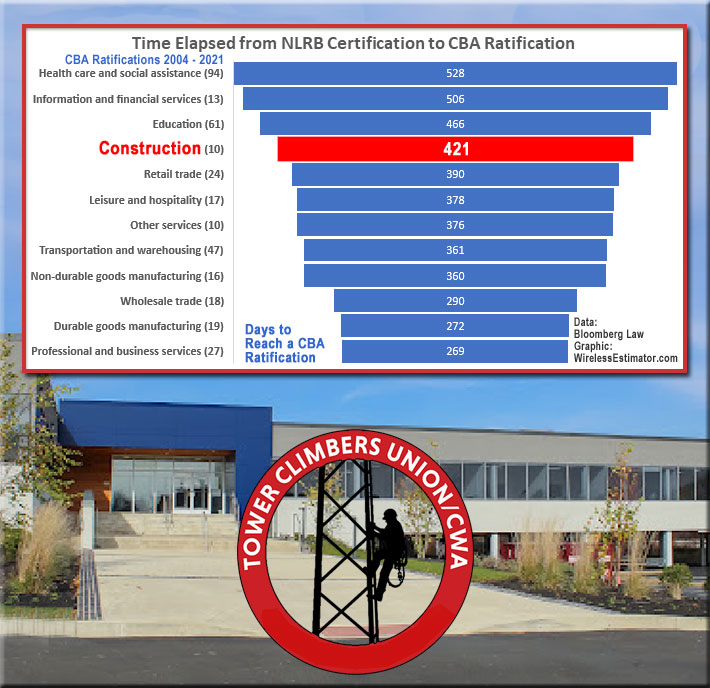 According to a Bloomberg Law analysis, it could take over 420 days before a collective bargaining agreement can be obtained once there is NLRB certification of the QualTek Tower Climbers Union/CWA vote.

A majority of 11 wireless tower technicians at QualTek have voted for union representation with the Communications Workers of America (CWA) in an election conducted this week in Henderson, NV.

Their next step after National Labor Relations Board certification will be to negotiate a contract with the QualTek Nevada location, a 2021 BACOM acquisition. The company has approximately 60 other locations that include wireless, wireline, renewables, recovery logistics, and RF compliance operations.

The workers, members of the Tower Climbers Union/CWA, are the first group of tower technicians in the United States to win formal union representation.

“This is an exciting moment for us and for every tower climber who wants better working conditions and improved safety,” said Derek Combs, a Tower Technician II at QualTek and member of the new union.

“We are the bedrock of the wireless communications industry, but our lives have consistently been taken for granted and neglected. To win respect you need power, and when you are a worker, power comes from negotiating a union contract,” said Combs.

“QualTek tower climbers put their lives at risk every day to maintain the wireless network for AT&T, Verizon, and T-Mobile. By voting for their union, they have taken the next step toward building power to raise wages and benefits and ensure a safer workplace,” said CWA President Chris Shelton in a statement provided to Wireless Estimator. “Now it is time for QualTek to show these workers the respect they deserve and bargain a fair contract.”

Negotiating a contract could take well over a year

Although Shelton is optimistic that the CWA can obtain a fair contract from QualTek and further CWA’s belief that every time a new group of workers gets a union contract, it puts more pressure on all employers to improve pay and working conditions, it may not happen overnight.

In fact, it could take over 420 days, according to a Bloomberg analysis of construction contract ratifications from 2004 to 2021, since the CWA will have to build the agreement from the ground up, and it doesn’t have a template with any company that employs the services of tower climbers.

The union has said in a position document that it will stand in solidarity “with small and medium-sized subcontractors.”

It’s generally defined in the U.S. that a small business is one with 50 or fewer employees and a mid-size business as one with between 50 and 250 employees.

According to Dunn & Bradstreet, QualTek has 6,325 total employees across its locations.

With 11 members, the Tower Climbers Union has a considerable challenge to capture any density of membership in order to be a significant player in taking advantage of contracting opportunities that will be available through the non-fiber prospects available through the $42.45 billion Broadband Equity, Access and Deployment (BEAD) funding.

According to most industry association estimates, there are approximately 35,000 employees that work on elevated communication structures.

Some of those workers are already members of the International Brotherhood of Electrical Workers and United Steelworkers. Both unions have taken a less combative position in their representation drives.

The CWA’s Washington lobbying to obtain federal funding for its members has been to focus upon denigrating the work product and poor safety protocols of America’s thousands of non-union wireless contractors, labeling those contractors as “low-road.”

For the past 10 years or more, there has been a general industry trend in apprenticeship programs and employee position descriptions to identify tower climbers as tower technicians at various levels since the skillsets required are well beyond just climbing a tower.