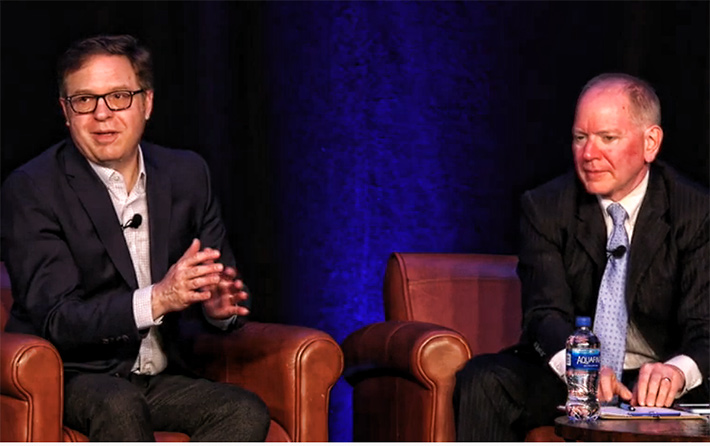 During an interview of NTIA Administrator Alan Davidson, left, moderated by Broadband Breakfast CEO, Editor and Publisher Drew Clark, it was noted that state funding available to wireless contractors and other broadband builders and suppliers might not become available for another year, possibly as long as 18 months.

During a February hearing on broadband expansion and internet access, National Telecommunications and Information Administration (NTIA) Administrator Alan Davidson informed representatives that “sunlight is the best disinfectant” and transparency will be a “huge” part of his agency’s administration in doling out over $42 billion in broadband funding.

On May 26, he again emphasized the importance of transparency during the Mountain Connect 2022 conference in Colorado.

However, on the same day, in correspondence to Davidson and U.S. Department of Commerce Secretary Gina Raimondo, Arizona Republican Senators Marsha Blackburn and Bill Hagerty want them to be more transparent as to why the NTIA improperly prioritized projects designed to provide fiber connectivity directly to the end-user.

In correspondence obtained by Wireless Estimator, they state, “The decision to prioritize fiber at the expense of other technologies is concerning for several reasons, not least of which is that it is contrary to the intent of Congress in the Infrastructure Investment and Jobs Act (IIJA). That language directed NTIA to give priority to projects based on speed latency, reliability, quality of services, and the expected timeliness of project completion.”

They also noted that nothing in the text “suggests that Congress intended for NTIA to preference fiber at the expense of fixed wireless, mobile wireless, satellite, or other viable technologies.”

According to the Senators, the fiber decision  contradicts the language of the IIJA, which calls on NTIA to prioritize areas unserved by broadband as speeds of 25 mbps / 3 mbps – which non-fiber technologies can easily achieve.

“A fiber-first rule makes no sense for many areas of rural America, especially in the state of Tennessee. We are concerned that this rule risks leaving large areas of the state unserved due to terrain that is not conducive to fiber deployment,” the Senators said, pointing out that Tennessee’s topography ranges from swamps to mountains, making deploying fiber in low density rural areas of the state extremely difficult, if not impossible.

They urged Raimondo and Davidson to reconsider their prioritization of fiber for broadband projects.

Under the Broadband Equity Access & Deployment program, each of the 50 states will be eligible to receive a minimum of $100 million to expand high-speed Internet access.

However, most states will receive hundreds of millions more as additional funding is allocated based on a formula that takes into account how many unserved households are in each state.