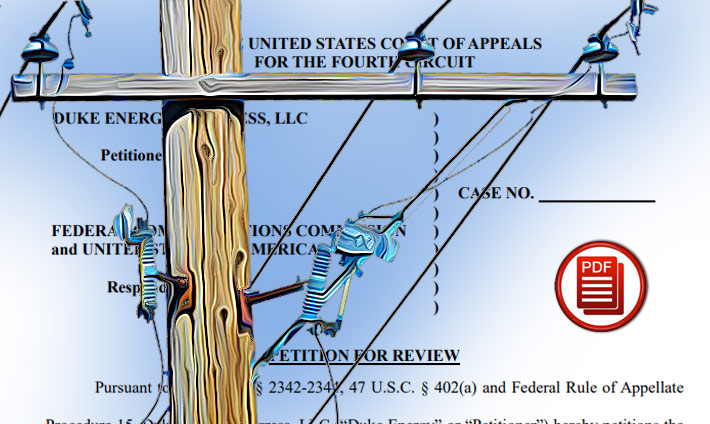 Duke Energy isn’t worried about public disapproval if they misgender the colloquialism — It ain’t over until the fat man sings; the public utility’s concern is their ability to convince the U.S. Court of Appeals for the Fourth Circuit that the FCC acted in a manner that exceeded its statutory authority when Commissioners closed the curtain on revisiting a rate ruling.

On November 17, 2022, in a unanimous vote, the FCC stood by its 2021 decision regarding utility pole attachment rates in a dispute between AT&T and Duke Energy Progress, denying Duke Energy’s bid to revisit a ruling that slashed the rates that AT&T pays to attach equipment to its utility.

FCC Chairwoman Jessica Rosenworcel applauded the FCC’s resolution of the joint use agreement decision, stating, “The details are complicated, but the message is simple – the Federal Communications Commission stands ready to do what it can to provide certainty so that disputes like these are resolved, poles are accessed, and high-speed networks are built.”

However, Duke Energy doesn’t believe it’s resolved and is asking the U.S. Court of Appeals for the Fourth Circuit to review the decision, stating it was “adversely affected by certain parts of the order” and is seeking review because they exceed or are inconsistent with the FCC’s jurisdiction and statutory authority, violate the Administrative Procedures Act, and are arbitrary, capricious, an abuse of discretion or otherwise contrary to law.

Any utility company or party wanting to intervene in the proceeding must file their intervention by December 28, 2022.

The petition is available here.