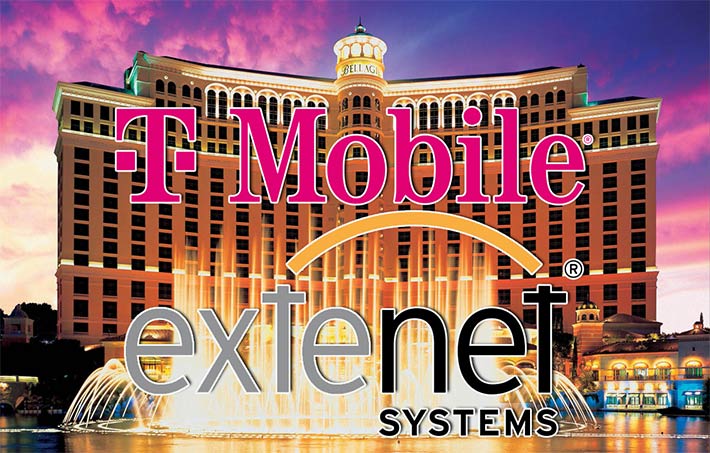 ExteNet Systems has signed an exclusive agreement with T-Mobile to deploy digital wireless infrastructure in significant sports, entertainment, and transportation venues such as the MGM Resorts properties.

ExteNet Systems, a leading privately held owner of LTE/5G wireless and fiber neutral-host communications infrastructure, today announced it had entered an exclusive agreement with T-Mobile to deploy digital wireless infrastructure in large sports, entertainment, hospitality and transportation venues, as well as to rationalize and decommission T-Mobile’s overlapping network assets inherited from its merger with Sprint. The agreement, which expands ExteNet’s existing relationship with T-Mobile as a primary wireless carrier in its contracted venues, is expected to deliver best-in-class wireless communications in commercial sites, creating unparalleled experiences for guests and users.

Under the terms of the agreement, ExteNet will deploy, own and operate the digital wireless infrastructure for large venues, and every venue contract couples ExteNet’s infrastructure deployment with T-Mobile, as the first committed carrier. This represents an industry first in enabling the extension of 5G wireless capabilities and state-of-the-art technology to fans and guests, with deployment timeframes up to two times faster.

“We are thrilled to continue building our relationship with T-Mobile to bring high-quality and cost-effective infrastructure operations to our clients and venue partners,” said Rich Coyle, ExteNet Systems Chief Executive Officer. “This collaboration enables a turnkey, win-win road map for T-Mobile’s consumer and business clients alike as we bring a revolutionary Un-carrier approach to venue contracting.”

As part of the expanded partnership, ExteNet will rationalize T-Mobile’s small cell framework and upgrade existing infrastructure, implementing a high-quality and cost-effective solution to deliver streamlined, faster and more efficient 5G wireless networks. These enhancements, which will be done without any service interruptions, are expected to provide a superior end-user experience and a competitive advantage for T-Mobile, as well as further elevate ExteNet’s reputation for innovative and customer-centric Un-carrier approach to venue contracting.

The rollout of the expanded agreement between ExteNet and T-Mobile, which took effect on October 1, 2022, is already underway. As part of the agreement, T-Mobile will be the first carrier to join the new wireless network ExteNet is deploying in each MGM Resorts property nationwide. In September 2022, ExteNet announced a groundbreaking partnership with MGM Resorts International to bring state-of-the-art distributed wireless networks to 25 MGM properties, consisting of 54 million square feet, more than 43,000 guest rooms, and serving more than 70 million visitors annually.

In November 2015, Digital Bridge and Stonepeak Infrastructure Partners headed a consortium that invested $1.4 billion to acquire ExteNet. In May 2021, a Manulife-led consortium acquired approximately 30% ownership for an undisclosed amount.

Marc Ganzi is the Executive Chairman of ExteNet.