Airplanes, trains, buses and even chainsaws have been unwitting protagonists in horror and thriller movies. An abandoned communications tower has finally reached stardom. 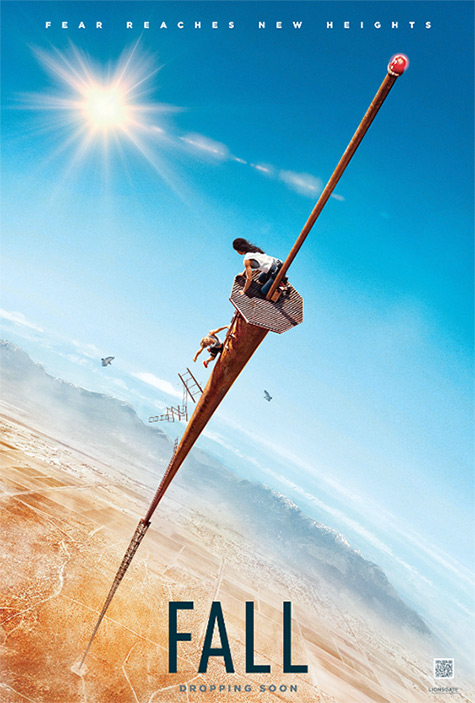 The movie poster for FALL

Thrillers typically highlight the failures of governments, institutions, and society as a whole. On August 12, Fall, a Lionsgate-distributed feature-length film will most likely not expose the callousness of the owner of a radio tower that abandoned the 2,000-foot structure without ensuring that it had a safety climb, guy wires, proper signage or fencing to prevent climbing, but focus on the adventurous rock climbers turned tower climbers who will be stranded at the top.

Tower construction and design professionals will have a field day pointing out the technical inaccuracies of the movie, such as the lack of a foundation for each leg.

Here’s the official description: “For best friends Becky (Grace Caroline Currey) and Hunter (Virginia Gardner), life is all about conquering fears and pushing limits. But after they climb 2,000 feet to the top of a remote, abandoned radio tower, they find themselves stranded with no way down. Now Becky and Hunter’s expert climbing skills will be put to the ultimate test as they desperately fight to survive the elements, a lack of supplies, and vertigo-inducing heights in this adrenaline-fueled thriller co-starring Jeffrey Dean Morgan.”

Hopefully, the computer-generated imagery will be better in the film than what appears in the trailer.

There will likely be an audience for the movie, especially considering that a two-minute drone video produced by Todd Thorin of VIKOR that featured Kevin Schmidt changing out a light bulb at the top of a 1,500-foot tower, had 18 million views.

It will be interesting to see the B-roll footage that is used in Fall. One scene could be Schmidt’s Salem, South Dakota TV structure since it too was abandoned when it became a casualty of the switch from analog to digital.

The real deal might be streaming later this year

The NATE and Storybuilt-produced feature film Vertical Freedom is expected to be acquired by a prominent film distributor and it could be on popular video and streaming platforms towards the end of the year.

Vertical Freedom is an epic, feature-length documentary film highlighting the professional and personal lives of six communications infrastructure workers in the United States who possess diverse backgrounds and compelling stories, on and off the job.

The film has been submitted for entry into 24 film festivals.