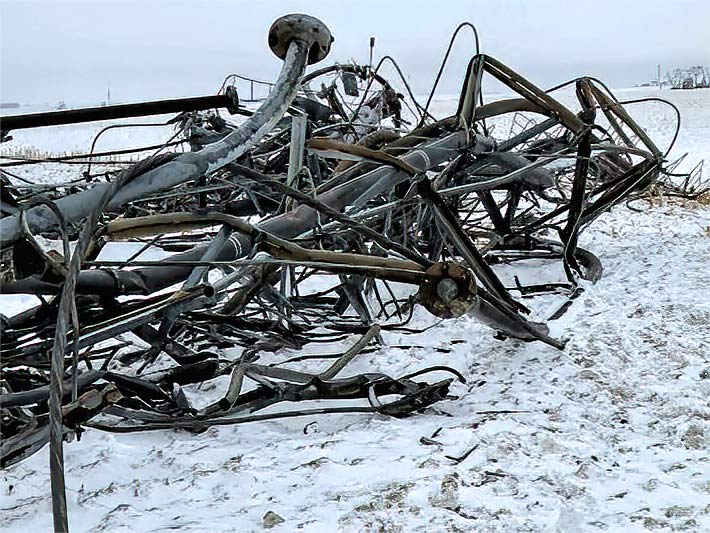 Two towers collapsed in South Dakota on Wednesday. The smaller structure was reportedly designed as a backup in case the taller tower failed. Alpha Media Photo

The massive winter storm that moved through the Plains Wednesday morning knocked down a 1,700-foot TV tower and an 800-foot broadcast tower in northeastern South Dakota just outside the boundaries of Garden City.

The 1,700-foot guyed tower, constructed in 1978, is owned by Nextar and was the home for CBS affiliate KDLO-TV and KDLO-FM

The 800-foot guyed tower, reportedly erected as a backup in case the 1,700 foot TV tower collapsed, also failed during the severe storm. A review of a Google image identifies that the towers were constructed so that if one collapsed, it wouldn’t hit the other tower.

When the tower fell just before 9:00 a.m., wind speeds were approximately 24 mph. During the day, the high was 32 mph with gusts of 52 mph. It is unknown what the design factors were at the time the tower was erected under EIA RS-222-C.

The area has seen considerably higher wind speeds over the years, but ice accumulation contributed to the collapse. At this time, it is unknown if anchor failure affected the collapse.

An adjacent 800-foot tower, also built in 1978 and owned by Nextar fell shortly after the TV tower collapsed. According to an industry technician, “The 800’ tower was an auxiliary tower to the big boy in case the other TV antenna system went down for any reason.”

When the towers failed,  transmitter buildings underneath them were damaged by falling sections.

Online speculation that the taller structure’s failure might have damaged the second tower and contributed to its collapse might not be accurate based on their locations.

The closest anchor of the 800-foot tower is over 2,000 feet from the base of the 1,700-foot-tall tower, and media photographs show the tall tower collapsing in about a 30 percent radius of its height.

In May, a broadcast tower collapsed in Salem, SD during a storm. Erected in 1976, the structure was 1,480 feet tall.

KDLO-FM was back on the air Wednesday afternoon when it switched to broadcasting from a backup tower just south of Watertown.

KDLO-TV, which is a satellite of KELO-TV, is off the air, though viewers can still find KELO programming on satellite and major cable providers.