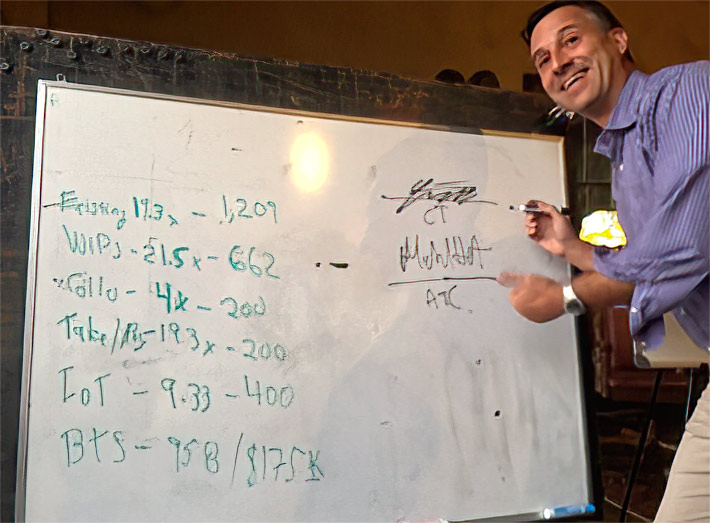 NO LONGER CELEBRATING – In October 2018, as shown in this lawsuit exhibit, Project Codu’s celebratory whiteboard was signed by American Tower Corporation’s Michael Hart, Vice President of Mergers and Acquisitions, and Jorge Hernandez on behalf of DT Holdings, Inc., setting the terms of an $800 million deal. However, the ready-to-be-inked agreement collapsed at the last minute, and plaintiffs are accusing American Tower International of breach of agreement. DT is suing for an amount in excess of $750 million.

According to the complaint, DTH and ATI began negotiations to establish a joint venture in Peru with site development (SDA) and master infrastructure (MUA) agreements, providing DTH’s subsidiary, DTP, funding to construct and deploy sites in Lima.

In December 2017, Terra was appointed to seek financing to buy out Pepppertree and Goldman Sachs or to acquire a third-party purchaser of Continental Towers’ shares.

Beginning in Late 2017, and through 2018, Terra and ATI negotiated a deal for ATI to acquire Continental’s towers.

In October 2018, at meetings held in Napa Valley, California, final negotiations were hammered out and would be submitted to the ATC Board of Directors for approval. The deal identified all material terms, including asset valuations and a definitive year-end closing date.

Terra said the date was “vitally important” since Terra’s authority to close the deal would expire on December 31, 2018.

The agreement detailed that after Terra’s minority stake buy-out, the company would become the sole owner of Continental Towers’ share and would then sell 100% of the company to ATI for $466 million. The total consideration agreed to be paid by ATC for Project Codu was approximately $800 million.

They were uncorking the wine bottles in Napa Valley

Everything appeared to be a go in Napa Valley when the parties memorialized Project Codu’s transaction on a celebratory whiteboard signed by  Michael Hart, ATC Vice President of Mergers and Acquisitions, and Jorge Hernandez on behalf of DTH.

On November 8, 2018, according to the lawsuit, ATI CEO Oliver Puech informed Hernandez in a text, “Hello Jorge, it looks like we have made it to the other side. Only one or two items remain to be resolved with Michael Hart, but the Investment Committee pre-approved the transaction. Congratulations.”

On December 7, 2018, ATI and DTH exchanged a final working draft term sheet, and the parties met four days later in Miami, FL, to finalize the agreement. At that time, ATI said it had to submit it to its Board of Directors prior to closing.

Then the agreement unraveled

Days later, Puech allegedly said that he did not wish to disturb the Board of Directors immediately before the Christmas holidays with such an immense transaction. He wanted to present Project Codu to the Board in 2019.

Hernandez, unnerved by the change, informed Puech that failure to complete Project Codu in 2018 would have adverse repercussions for the parties, especially regarding the acquisition of 94 Telefonica towers in Guatemala that DTH had previously contracted to purchase that had to be finalized by year-end in 2018.

In addition, DTH and ATC have ongoing relationships with Telefonica as a key carrier throughout Latin America.

The deal was temporarily salvaged with a ‘reverse engineered’ loan

After a hastily convened meeting on December 14, 2018, in Miami, Puech reportedly said that it was impossible to submit Project Codu to the Board by the end of the year. Still, it could be finalized during the first quarter of 2019.

The lawsuit states that ATC agreed to fund DTH’s purchase of the Telefonica towers for approximately $19 million by advancing DTH’s Peruvian subsidiary with the necessary funds to close by December 31, 2018.

“ATC reverse-engineered the payments to DTH’s subsidiary in Peru under the pre-existing site development agreements by increasing the site unit down payment for future tower sites, so as to disguise the $19 million dollars as payments towards the purchase of future towers when in fact it was a bridge load to DTH by ATC in furtherance of and in partial performance by ATC of Project Codu,” the complaint states.

ATC officials reportedly said that they could not loan the funds to DTH for the Telefonica purchase without prior Board of Director approval; instead, because the amount necessary to fund the acquisition of the towers was within their own approval range as ATC executives, they provided the advancement through an amendment to the existing site build agreement.

DTH then closed on the towers when ATI transferred the funds to Telefonica’s accounts at Citibank in New York.

DTH claims that ATC ‘falsely represented’ in its internal documents that the funds advanced were to fund more towers.

Although the lawsuit states that ATC CEO [and Chairman of the Board] Jim Taiclet approved Project Codu based on the terms recommended by the investment committee, in early 2019, without an explanation, ATI notified the plaintiffs that it would no longer be proceeding with Project Codu.

The lawsuit states, “ATI’s withdrawal from Project Codu has resulted in substantial financial harm to Plaintiffs. Indeed, among other damages, DTH is currently saddled with millions of dollars in expenses that were incurred in reliance on ATC’s representation that it would proceed with the Project Codu transaction.”

Plaintiff’s attorney says their client was strung along

“The conduct of American Towers [SIC] throughout this negotiation should be very concerning to shareholders,” said Juan Rodriguez, an attorney representing Terra Towers, Corp., in a press statement issued today. “It is clear from the facts that as one of the largest tower companies in the world, American Towers feels it may act with impunity, stringing along a smaller company and sticking them with unwanted debt, and hope to get away with it. But this time, Terra Towers is willing to fight back and is determined to obtain its due damages.”

In past requests, ATC has stated that it will not comment on ongoing legal proceedings. ATC has 20 days to reply to the complaint upon receipt of being notified of the lawsuit.

On March 21, 2021, majority shareholders of Continental Towers, Terra Towers Corp., and TBS Management filed a lawsuit against Weston, Florida-based Torrecom Partners, alleging that Peppertree and Goldman conspired to depress the company’s value and force a merger that would enable Continental’s minority shareholders to squeeze them out of the post-merger entity.

The complaint also alleges that Goldman and Peppertree systematically blocked multiple growth opportunities, including a lucrative contract awarded by Telefonica to build 200 towers in Guatemala and Nicaragua.

When the complaint was filed, Howard Mandel, Co-President of Peppertree Capital Management, Inc., informed Wireless Estimator, “Our reputation for integrity over more than two decades of business dealings speaks for itself. The plaintiff in that lawsuit, unfortunately, has earned quite a different reputation.”