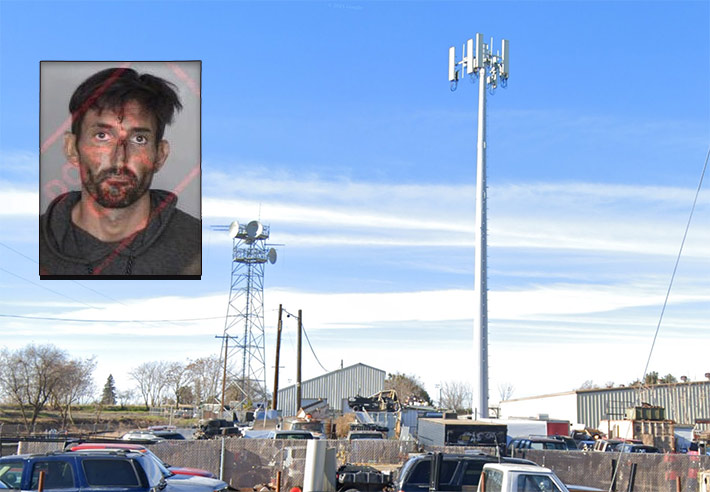 Authorities did not immediately respond to a request to identify which tower felon Michael Williams climbed to the top and stayed there until he was talked down six hours later. The one on the left in Marysville, CA is a 137-foot structure owned by American Tower Corp. Verizon owns the 95-foot monopole. Knowing how violent Williams has been in the past, emergency workers might have been hesitant to rescue him.

A 37-year-old man was arrested after fleeing officers, ramming his pickup into two sheriff’s vehicles, then climbing to the top of a 150-foot cell tower before finally giving up, the Yuba County (CA) Sheriff’s Office reported.

Deputies said the incident began Saturday when they attempted a traffic stop in Marysville on a man named Michael Allan Williams.

Williams stopped his Ford F-150 truck but then sped away.

According to a press statement, he rammed the truck into the driver’s side of a patrol vehicle during the chase, severely damaging the car and injuring the deputy.

The truck rammed a second patrol vehicle after Williams found himself stuck at a dead end near F and Third streets, authorities said, damaging that officer’s car but not injuring the deputy.

Williams’ truck eventually became disabled after he drove through a gate and into a sewage drain.

Fleeing on foot, Williams climbed to the top of a 150-foot cell tower and refused to come down, according to the release.

He was arrested on suspicion of multiple felonies, including assault with a deadly weapon on peace officers, and booked at the Yuba County Jail.

Williams was found to be on probation for assaulting a police officer, and it was learned the truck he was driving was stolen, according to the Sheriff’s Office.

The injured officer was released from the hospital and is recovering at home.

Williams is another example of California’s justice system gone awry

On July 28, 2022, Police in Chico, located 50 miles north of Marysville, arrested Williams for allegedly breaking into a gas station.

When an officer approached Williams, he fled into a nearby business complex. The officer caught him, but the 6’-1” man violently resisted.

Almost immediately, a Chico Police Sergeant arrived, and the two attempted to detain Williams, who was still violently resisting and attempting to flee.

Williams was caught and detained in handcuffs after another officer used a Taser gun.

He continued to resist violently during the entire time he was in custody.

One officer was injured during the incident. Williams was charged with burglary, assault on a peace officer, and resisting arrest.

Williams, who stated he was homeless, was held on $73,000 bail in July but was later released and placed on probation.

After assaulting police officers in Chico, Williams’ maximum penalty could have been up to one year in county jail and/or a fine of up to $2,000.

Saturday’s felony of assaulting a police officer with a deadly weapon could land Williams in state prison for up to eight years.