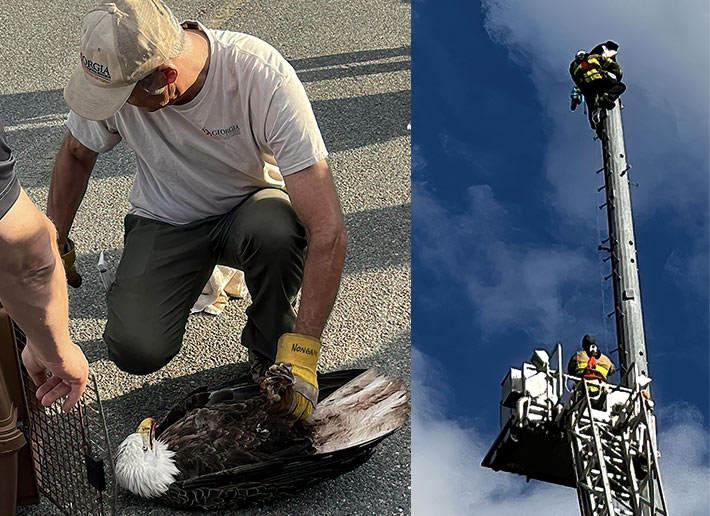 DNR Biologist Mark Dodd attended to the American Bald Eagle once it was released from the tower and flew to its awaiting rescuers. Sadly, it was announced on Saturday that the eagle had succumbed to its injuries.

Firefighters over the years have rescued tower technicians off of communications towers, but on Thursday, the City of Macclenny Fire and Rescue Department in Florida was called upon to rescue our national symbol of pride – an American Bald Eagle that was impaled on a lightning rod of a decommissioned 120-foot monopole at the St. George Elementary School in neighboring Charlton County, Georgia. 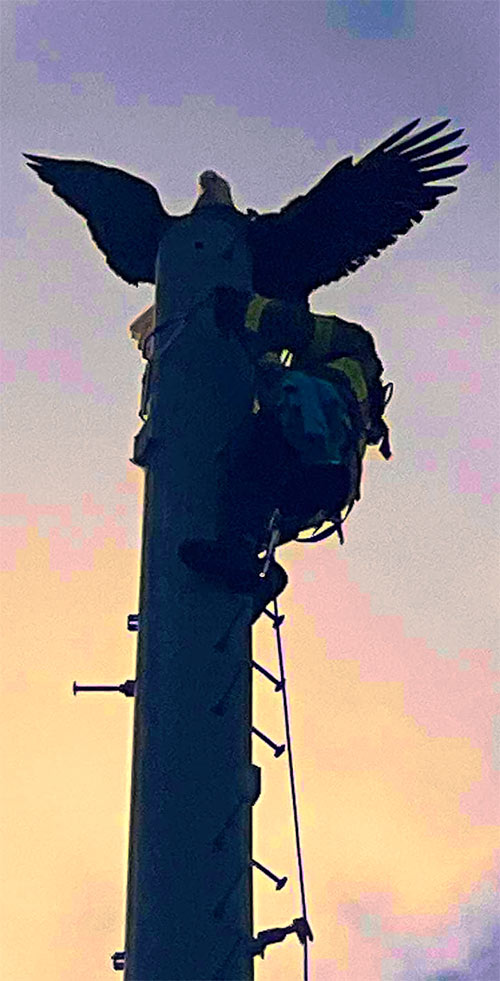 Firefighter Louis Castle is dwarfed by the outspread wings of an American Bald Eagle as he removes it from the lightning rod that it was impaled upon. Photos: Maclenny Fire and Rescue Department

The interstate, interagency rescue effort began when a resident contacted the Charlton County Sheriff’s Office, concerned about what she thought was a large bird hung up on something on top of the tower.

Upon arrival, Deputy Jeff Floyd identified that it was a Bald Eagle.

According to Sheriff Robert Phillips, after much research, making calls, and seeking advice, his department was able to get a wildlife biologist from the Department of Natural Resources to respond to the scene.

However, the dilemma facing his office was simple: Who could climb the 100-foot-plus monopole to free the eagle?

The City of Macclenny’s Fire and Rescue Department came to the rescue. They were able to run a ladder up near the top of the pole and firefighter Louis Castle climbed the rest of the way and was able to free the eagle.

As he was freed, the majestic eagle was able to glide to the ground and land safely. Firefighters attended to his wound and placed him in a cage to be moved to a bird sanctuary to make a full recovery, hopefully.

Dozens of social media posts rallied behind the many people who helped to save the eagle and prayed for its recovery.

“We are saddened to report that despite the efforts to save the eagle on Thursday, he succumbed to his injuries yesterday.”

“This was a difficult situation in that we have limited resources as a small community. We are very fortunate to have a remarkable working relationship with all our neighboring counties when we need them,” said Sheriff Phillips.