Associations have refined the art of using internet media to present their organizational messages to a broad audience. Last year, NATE: The Communications Infrastructure Contractors Association released a compelling white board that took carriers to task for offering matrix pricing, forcing contractors to possibly cut corners on safety and quality to remain sustainable.

Yesterday, the Tower Climbers Union/CWA released a vivid video providing a window into the lives of tower climbers who take pride in the work they do connecting millions of Americans but often have to make the difficult choice between risking their safety and lives or taking on jobs under dangerous conditions.

The video indirectly points out the results of matrix pricing and also serves as a promotional tool to further collective bargaining within other wireless contractor company workers following a recent announcement that a majority of 11 wireless tower technicians at QualTek have voted for union representation with the Communications Workers of America (CWA) in an election in Henderson, NV. 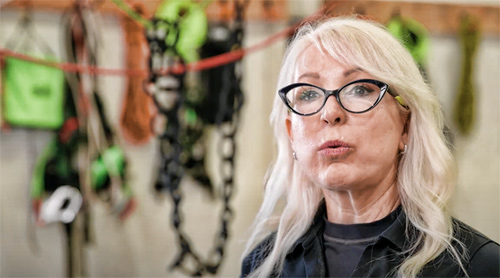 “We’re not going to do any night work at 20 below in the middle of the night with 30 mile-per-hour winds,” said union safety trainer Kathy Gill.

“It takes a lot for you to have full service, five bars, and 5G,” says Carl Milloy, a tower climber featured in the video. Ryan Campbell adds, “When I first started, I worked three months straight, no days off. My biggest shift was 48 hours because we were trying to complete a quota.”

The CWA stated in a press release, “The workers, who are constantly overworked and underpaid, also explain the difficulties of living paycheck to paycheck while executives from the large telecom corporations at the top continue to reel in exorbitant bonuses and record-level profits.”

“They make you do the work in a short time, and really the big companies put everything in their pockets,” explained Carlos Vasquez-Uscanga, who has worked in the industry for 14 years.

The video also features Kathy Pierce, a mother who courageously shares the story of her son, Chad, who fell 180 feet to his death after expressing his reservations about the climbing conditions.

“They said he should have never been up there that day. There was ice on top of the tower. He thought he’s gonna lose his job and that’s why he climbed. The carrier didn’t do anything. They said they weren’t responsible,” shares Pierce. She added, “I just hope that the tower climbers go union in the memory of my son.”

The CWA said, “Unfortunately, this is far too common for tower climbers. The major carriers like Verizon, AT&T, and T-Mobile, who rely on the workers to maintain service and roll out new technology, escape accountability by farming out the work to subcontractors. The workers organizing with CWA to form a union hope to change this by encouraging all tower technicians, as well as all workers who work at wireless sites, to stick together and take action.”

Dave Harrison, a 25-plus-year veteran in the industry featured in the video, said, “One guy can’t change the world, but you know 10,000 have a chance to make something better, something different.”

The video is available here.