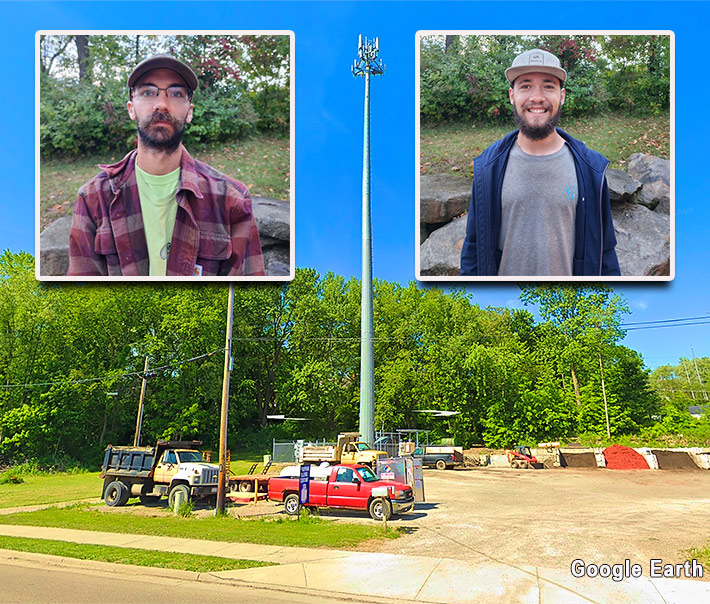 Tower technician Patrick Vanhorn (left) and Connor Phoenix of GRaas Incorporated made the rescue of a 15-year-old unauthorized climber in Canton Township, OH, in the early morning hours of Tuesday. SBA Communications’ safety personnel arranged the rescue when the local fire department couldn’t reach the top of the 190-foot monopole.

A Fox 8 News viewer yesterday afternoon sent Wireless Estimator an email with a link to an article on the Ohio TV station’s website that a 15-year-old boy had been rescued off of a 190-foot cell tower.

With few details, it stated, “As the fire department’s ladder was not tall enough, rescuers had to put together a climbing crew, which took a while to assemble.”

Not reported was the backstory of how industry professionals joined together to successfully rescue the teen who, for whatever reason, decided to climb to the top of the tower just before midnight on Monday.

The 15-year-old, according to authorities, climbed the Canton Township monopole located off of Cleveland Ave., SW, across from the Canton South High School.

When he was up at the top of the antenna mounting frame, looking down, he froze with fear and was afraid to descend.

First responders were not equipped to climb the tower or have an aerial ladder truck that could reach more than 90 feet. Instead, they contacted SBA Communications, the structure’s owner, whose compound signage provided an emergency contact number.

After the SBA team conferenced on the safest and most practical way to get qualified rescuers to the site, Fields phoned Pennsylvania-based GRaas Incorporated’s owner Gil Figueroa to see if he could marshal two tower technicians out of his Columbus office capable of rescuing the teen.

At the same time, Surface, who had been a career fireman for seven years, contacted Marathon Petroleum Fire Chief Rob Leahy, who rushed to the site to assess the situation and see if his organization could assist in the rescue.

However, Figueroa was able to raise tower techs Patrick Vanhorn and Connor Phoenix, who left immediately with an extra climbing harness and safety gear. Figueroa also hurried to the site.

Vanhorn, assisted by Phoenix, climbed to the top of the structure at approximately 3:45 a.m. and had the trembling teenager put on the harness as an additional safety line was put in place to transition him off the platform.

After being instructed on using the cable grab attached to the climbing cable and his harness, the teen carefully took measured steps down on each step bolt.

However, according to an individual knowledgeable of the rescue, at about the 80-foot slip joint transition level, where the step bolts had a slight offset pattern, the teen slipped off the bolt but was caught by the cable grab and secondary safety.

To the joy of his parents and first responders on site, he was brought safely to the ground at about 4:45 a.m.

Hopefully, he’s a little wiser and appreciates the combined efforts of SBA Communications, GRaas, and the village of other professionals who may have saved his life.

Coppola said he was proud of the team effort of first responders, tower techs, and his safety personnel. “It’s not about SBA; it’s all about being able to get a boy off a tower safely,” he said.