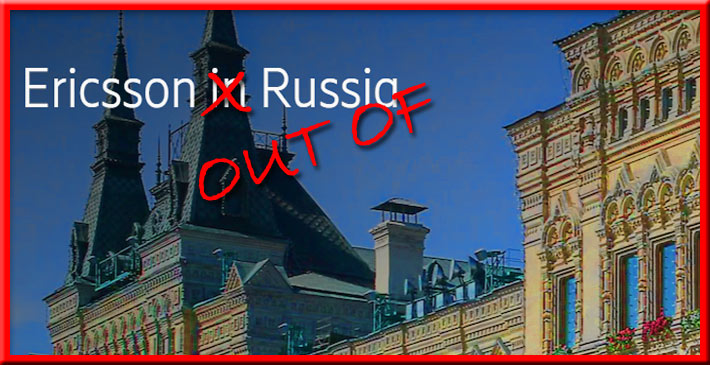 Ironically, Ericsson got its first major start in Russia when in 1900 it opened its first large plant in St Petersburg. But in 1905, the St Petersburg plant became an Ericsson subsidiary after business in Sweden opened up.

Swedish network equipment maker Ericsson is suspending its business in Russia indefinitely and has put employees on paid leave.

This comes six weeks after the Swedish telecom equipment maker started a review of the impact of Western sanctions on its operations in Russia and suspended all deliveries to customers in Russia.

The company said today it would record a $95 million provision in the first quarter for impairment of assets and other exceptional costs related to the move.

The company has about 600 employees in Russia, according to a spokesperson.

Ericsson does not have any manufacturing centers in Russia and its major manufacturing facilities in Europe are in Estonia and Poland.

Many hundreds of Western companies have either withdrawn or suspended operations in Russia since the country invaded Ukraine in February.

Ericsson had paused deliveries to customers in Russia in February, and rival Nokia did so in early March to protest Russia’s unprovoked war.

Late last year, Mobile TeleSystems (NYSE: MBT), Russia’s largest mobile communications provider and a leading provider of media and digital services, and Ericsson signed a strategic partnership to develop private 5G-ready networks for industrial enterprises in Russia. Their stock stopped trading on February 25, closing at $5.50. In January before the war it was at $8.11.

Nokia has also suspended deliveries to Russia for the time being.

Nokia in November announced plans to set up a joint venture with YADRO, a leading Russian developer and producer of high-performance servers and storage systems, to build 4G and 5G telecom base stations in Russia.

Nokia said in a statement the company complies with all sanctions and restrictions and has suspended deliveries to Russia for the time being.

“Nokia will not continue R&D in Russia and we have already started the process of transferring R&D tasks outside of Russia,” the company said.

Ericsson is also closing their Ericsson Academy and their 5G Innovation Hub in Moscow.