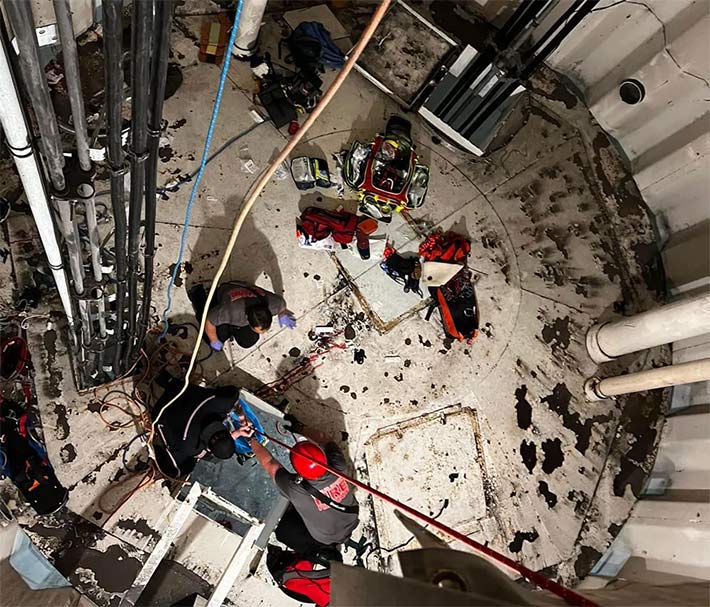 The condition of  26-year-old tower technician Brandon O’Neil of Orlando, FL is unknown after he fell from an unknown height inside a water tower in Palm Coast, FL, on Tuesday evening and suffered serious injuries. 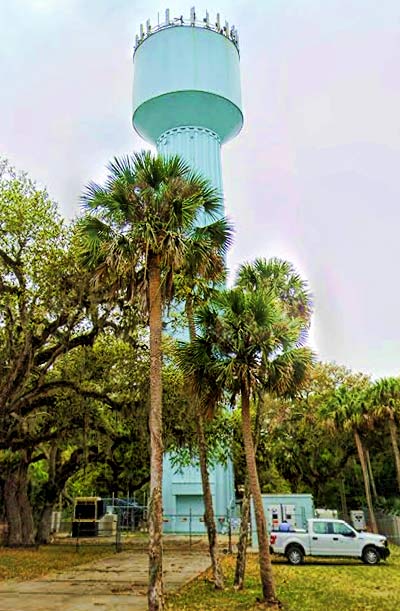 The multi-tenant water tower at 5636 North Ocean Shore Boulevard is owned by the city. It is managed by Diamond Communications. (Google)

A Flagler County press release said that the technician “was atop the tower when he fell approximately 120 feet,” which is being repeated in media headlines.

However, according to a Flagler County Sheriff’s Department narrative of the incident that was obtained by Wireless Estimator, Flagler County Fire Rescue workers said they did not know from what height O’Neil fell. In addition, his coworker, 26-year-old Mark Conant, of Cocoa, FL, who was inside the tower when O’Neil fell, did not see the fall and could not advise a Sheriff’s investigator how far he fell.

Employed by Ericsson, Conant informed the investigator that he and O’Neil had been working on cell phone equipment on top of the water tower and around 6:00 p.m., he sent O’Neill down the interior ladder at the end of the day.

Approximately five to ten minutes later Conant began to descend as well. While doing so, he said he heard a “loud thud” and then observed O’Neil laying on the metal dome inside the structure.

Conant told Sheriff’s Officer Jason Prather that O’Neil had been employed by Ericsson for approximately six months and he “did not believe Mr. O’Neil to have had prior climbing experience.”

The Flagler County Fire Rescue Technical Rescue Team extracted O’Neil from the structure and transported him to Halifax Medical Center in Daytona Beach. The Flager County FireFlight helicopter was not utilized to airlift O’Neil to a trauma center since it was grounded due to inclement weather. 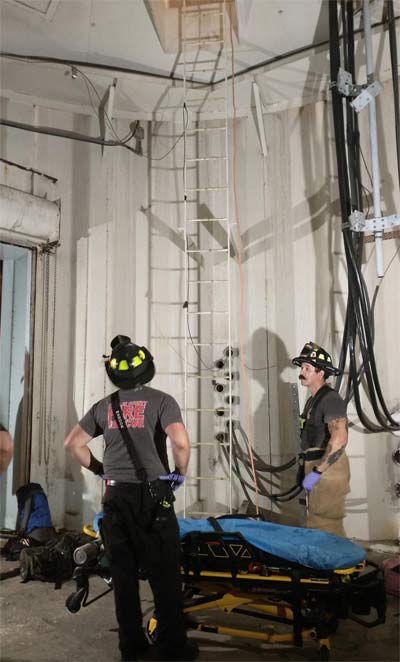 Rescue worker get ready to respond when the injured tower tech is lowered from above. (Flagler County)

O’Neil’s climbing harness was collected for further inspection. Fire rescue personnel said that O’Neil’s harness was secured on his person “but was not secured to any ropes or lines when they arrived.”

Prather said he spoke with David Payton, who advised him he has investigated multiple falls while employed with Ericsson and that the company “has a policy that requires climbers to have some form of tethering for safety which would prevent falls greater than six feet.” He also advised that “descents should be made either using the ropes with a descent device or two large clips for climbing a ladder.”

Ericsson technician Nicholas Lupo was also on site when the incident occurred. He said he was working under a canopy outside when he heard a thud inside. He said that he did not see O’Neill fall.

“I couldn’t be more proud of the crews and their abilities to utilize their training to bring the patient to safety,” said Fire Chief Michael Tucker. “These guys and gals never cease to amaze me.”

Wireless Estimator will provide updates on O’Neil’s condition when they become available.