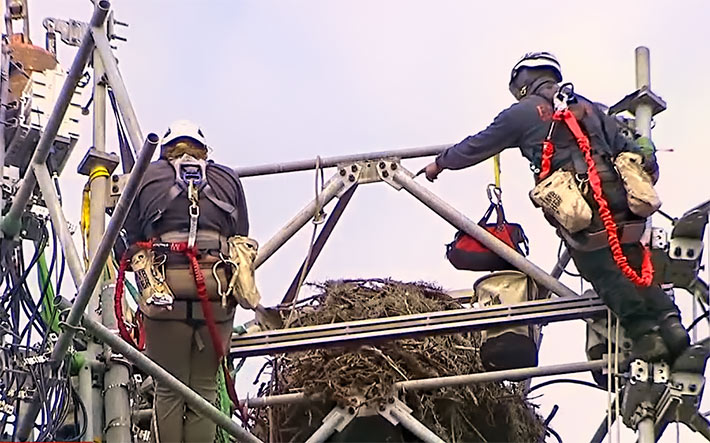 THE EAGLE HASN’T LANDED in nests on cell towers in South Carolina, according to an eagle biologist with the South Carolina Department of Natural Resources; however, the U.S. Fish & Wildlife Service has initiated an investigation since an “Eagle Nest Take” permit was not issued for an American Tower site in Mount Pleasant, SC where a crew removed a nest on Thursday. By Friday, the nest had disappeared and was replaced by new antenna sectors. Photo: Screen shot from ABC 4 News video.

A federal investigation is in the works after residents contacted wildlife officials after they watched a tower crew remove a bald eagle’s nest from a cell tower on Thursday in Mount Pleasant, SC.

A local wildlife photographer, Cacky Rivers, informed News 2 that she had been in touch with federal and state agencies who reported to the scene.

According to the U.S. Fish & Wildlife Service’s website, removing eagle’s nests is illegal unless a permit is issued.

It is unknown what company was providing sector installs on the American Tower self-supporting tower, and attempts to identify the contractor by Wireless Estimator were unsuccessful.

The South Carolina Department of Natural Resources (SCDNR) said it was aware of the removal of a “large raptor nest,” and the U.S. Fish and Wildlife Service (USFW) has initiated an investigation. The agency confirmed that an “Eagle Nest Take” permit was not authorized for the location.

In a Tweet, News 4 anchor Katy Soldt said USFW informed her that an eagle biologist with SCDNR “does not recall that there were bald eagles nesting on communication towers in South Carolina.”

A member of the tower crew informed reporters that they were not told by their management that a permit was necessary to take the nest down.