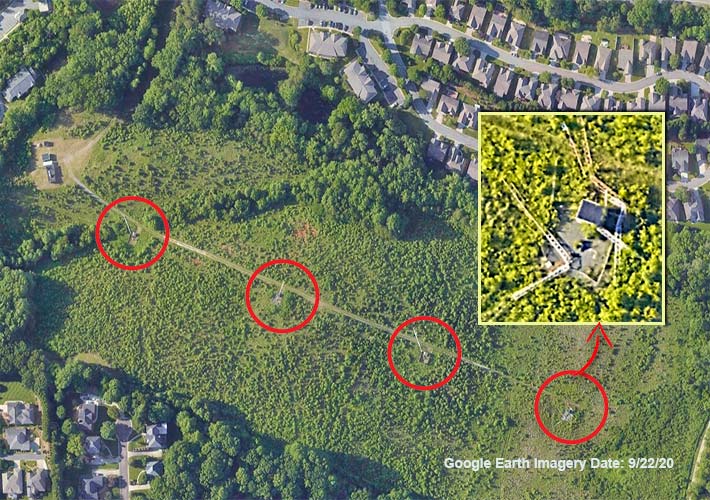 FOURTH DOWN, NONE TO GO – When Truth Broadcasting Co. purchased Winston-Salem, North Carolina’s oldest radio station, WSJS 600-AM, in March 2021 from Crescent Media Group for $625,000, one of the station’s four-tower array had previously collapsed and had been nested amongst brush and weeds since at least September 22, 2020, as seen on Google Earth. Since then, the station has been operating on FCC approval for emergency antenna facilities. In late December and Early January, vandals or one individual had felled on different days the other three 410-foot guyed towers erected in 1968. It inadvertently provided financial relief to the religious broadcaster as he gets WSJS back on the air at another location with a plan that had been in operation since last August or earlier and has been approved by the FCC.

The FBI and local authorities are investigating the felling of three AM broadcast towers owned by Truth Broadcasting Co. in Winston-Salem, North Carolina, each one on a different day within less than three weeks.

The first collapse witnessed by a nearby homeowner, Cliff Orgnon, occurred on December 21, 2022.

After the three towers were destroyed, WSJS went off the air.

According to Stu Epperson Jr., the president of the Christian broadcasting company that owns the station, at first, he thought it was weather related. However, on the date of the collapse, peak winds topped out at 13 mph, and most of the day averaged 9 mph. 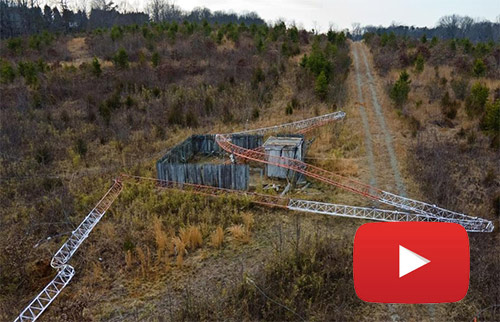 Epperson said in an interview with the Winston-Salem Journal that when another one of his towers fell, he realized “it was actually criminal activity.”

Although Orgnon alerted city council members on January 3 at a public meeting that two towers had collapsed, Truth Broadcasting appears to have waited until January 5  to contact the Winston-Salem Police Department to investigate the criminal incidents that began 16 days earlier.

Epperson informed the Journal that his employees implemented a patch to put the 600 AM signal onto the last tower on the property.

Unfortunately, the vandals took down that one last Monday or Tuesday, crippling WSJS’s weak signal.

Their prayers may be answered quicker than expected

On Tuesday, Epperson posted on Facebook a photo with him forlornly contemplating the station’s dilemma as he sat on a tower section of one of his towers that collapsed before September 2020, stating, “Today has been one of the toughest days of my broadcasting life.”

Concerned about the actions of criminals, over 525 viewers commented, many asking the Lord to bless him and quickly restore his towers.

Epperson said that the towers were insured.

He told the Journal that he doesn’t know how much the towers were worth or how much money it will take to replace them, but determining that cost is one of the tasks ahead.

However, at least six months ago, he had already decided that he wasn’t going to erect another guyed tower required by the FCC to replace the one that collapsed in 2020. That structure would cost at least $200,000, according to knowledgeable broadcast individuals that Wireless Estimator contacted.

They noted that final pricing would be based on soil conditions and other variables, but a four AM tower array could cost anywhere between $800,000 and $1 million or more.

Last August or earlier, Truth Broadcasting was already planning to abandon its aging 7870 Robinhood Road towers since the property they co-owned, after zoning approval, would be developed into a mixed-use residential development of 156 apartments, 14 duplexes, and 178 units of senior housing, and the towers and their extensive grounding systems would have to be removed.

Truth Broadcasting applied to the FCC in August to triplex with WPOL and WSMX on a 385-foot tower erected in 1937 that Truth Broadcasting owns about 6.5 miles away, where WSJS would drop from its current directional 5kW day and night utilizing a four-tower array to a nondirectional 1.7kW day and 110 watts night.

Before acquiring WSJS for $625,000 from Crescent Media Group on March 3, 2021, Truth Broadcasting was aware that it would have to replace a collapsed tower on the eastern side of its array since WSJS was nondirectional at a power no greater than 25% of the authorized power.

That authorization expired on May 30, 2021, but Truth Broadcasting renewed the special authority to operate WSJS with emergency antenna facilities, informing the FCC in its most recent application that it was relocating to another location, not rebuilding the collapsed 410-foot tower as Crescent had said they were going to do.

The FCC approved Truth’s application to move to its new location on January 11 and provided a construction permit.

During the Winston-Salem City Council meeting on January 3, when the tower site property was approved for redevelopment, Orgnon registered his concern (38:09 to 40:44) about the existing towers’ lack of obstruction lighting. He did not identify a time they had been non-compliant.

He said that he had contacted the developer and was informed that a Notice to Air Mission (NOTAM) had been made.

Although the NOTAM is good for 15 days, it appears that it has been canceled as of Saturday since, following the meeting, the remaining two towers collapsed.

If vandals didn’t destroy the towers, Truth Broadcasting would have had to bring the structures into compliance, which would have involved expensive obstruction lighting and painting.

Orgnon noted that the four towers (1007576, 100577, 100578, and 100579) were listed in the FCC’s database as being owned by Crescent Media, and he wanted the current property owners to require WSJS to contact the FCC and transfer ownership so that the information is up to date with the correct contact information.

If an owner doesn’t transfer ownership of its newly acquired towers in a timely manner, the FCC can issue a fine as it did when Truth Broadcasting received a Notice of Apparent Liability in 2001 for failure to register three other of its AM antenna structures in Winston-Salem, amongst other violations, and was issued an $11,200 fine.

WSJS began broadcasting in April 1930. It provides a talk and sports radio format. According to its website, Truth Broadcasting Corporation broadcasts predominantly preaching and teaching on Christian and Bible-based topics in North Carolina, Virginia, Iowa, and Utah.

Epperson urges anyone with information about the vandalism to call Winston-Salem police at 336-773-7700. Upon conviction of destroying a communications tower, the penalty is up to 10 years in prison.

Hopefully, for the FBI, the third time will be a charm

The last time multiple towers were criminally destroyed at a single location in recent history appears to have occurred on September 4, 2009, in Everett, Washington. 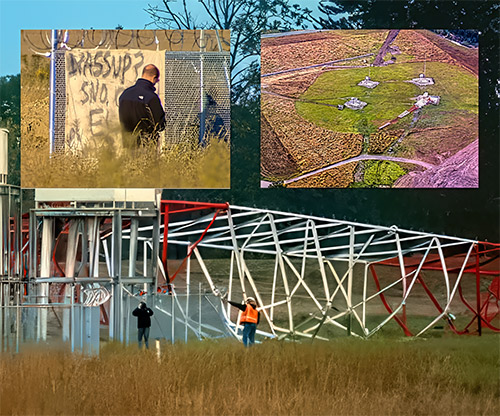 After two self-supporting towers in Everett, Washington, were destroyed, the incident was considered an act of terrorism.

Whereas there has not been any vocal opposition about the Robinhood Road towers that were erected before many of the homes in the surrounding area were constructed, the North American Earth Liberation Front (ELF) took credit for their terrorist actions of destroying a 349-foot tower and an adjacent 199-foot one with a trackhoe in Washington that are owned by KRKO.

The FBI became the lead investigative agency in the incident, assisted by the Snohomish County Sheriff’s Office.

The radio station owner offered a $25,000 reward for information leading up to the arrest and conviction of whoever was responsible.

To date, the bounty has gone uncollected.

The FBI also investigated a fire reportedly set by ELF in a Snohomish County that caused $7 million in damage to a new home development. Although the Building Industry Association of Washington offered a $100,000 reward, no arrests have been made.

Hopefully, since Epperson said the FBI had identified the destruction as a federal crime, their investigation might be buoyed by knowing the third time is a charm.