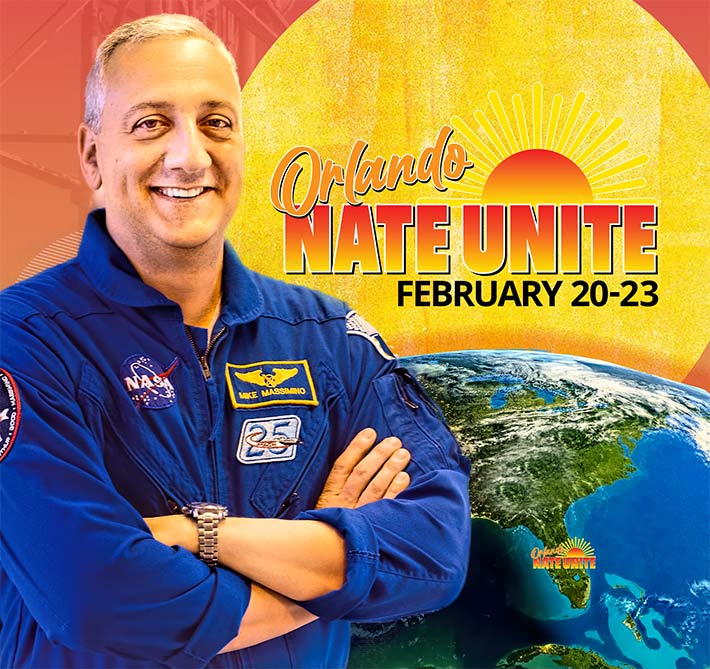 Former astronaut Mike Massimino, the keynote speaker at NATE UNITE 2023, uses humor and his unique storytelling ability to inspire audiences to identify the passion in their work, to use teamwork and innovation to solve problems, to provide leadership in the face of adversity and crisis, and to never give up on pursuing a goal. He exemplified the benefits of pursuit when he persisted through three rejections over seven years on his way to becoming an astronaut, including overcoming a medical disqualification by training his eyes and brain to see better.

Tower techs, rightfully so, are proud of the heights that they’ve climbed, some being able to put a desirable hash mark on their helmet if they’ve reached the coveted 1,900-foot level.

NATE UNITE 2023’s keynote speaker, Mike Massimino, would have a considerably different marking for his helmet, representing he climbed – with an assist from a space shuttle orbiter —  to his 1,848,000-foot high workstation in 2002.

The former NASA Astronaut, a New York Times bestselling author, a Columbia University professor, an advisor at The Intrepid Sea, Air and Space Museum, and a television personality will inspire attendees during the association’s luncheon at their conference on Tuesday, February 21. 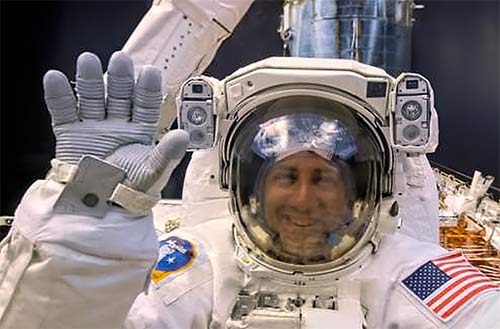 ONE GIANT TWEET FOR MANKIND – Astronaut Mike Massimino was the first person to tweet from space with: “From orbit: Launch was awesome!! I am feeling great, working hard, & enjoying the magnificent views, the adventure of a lifetime has begun!” During the NATE keynote, it is likely that Mike will emphasize how NASA taught those in the space program the importance of safety and how dealing with change is necessary to prevent accidents and fatalities, whether you’re tethered to a telescope 332 miles in space or tied off to an 80-foot monopole in Pluto, Mississippi.

Information about the luncheon sponsored by SBA Communications Corporation, and other details regarding the industry’s most attended peer event for communications infrastructure contractors, their clients, and suppliers, is AVAILABLE HERE. The conference will be held in Orlando, FL, February 20-23.

A spacewalker on the final two Hubble Space Telescope servicing missions, Mike and his crews traveled faster (Mach 26) and higher (350 miles) than any other astronauts in the 21st century while increasing the discovery capabilities of arguably the most extraordinary scientific instrument ever built by a factor of 100.

During the final Hubble servicing mission, Mike faced both success and life-threatening challenges as he performed the most intricate repair ever attempted in space. In addition, Mike set a team record for cumulative spacewalking time on a single space shuttle mission, was the last person to work inside the Hubble Space Telescope, and was the first person to tweet from space.

Mike has made numerous television appearances, including a recurring role as himself on the CBS comedy The Big Bang Theory.

He hosted the Science Channel series The Planets and Beyond, a commentator on Discovery Channel’s Space Launch Live. In addition, he was featured in National Geographic Television’s One Strange Rock and the Netflix series Worn Stories.

Mike is a frequent guest on morning shows and late-night television, including The Today Show, Good Morning America, and The Late Show with David Letterman, and a guest expert on network and cable news, including NBC, ABC, CBS, CNN, Fox News Channel, MSNBC, and CNBC.

Mike’s first book, Spaceman: An Astronaut’s Unlikely Journey to Unlock the Secrets of the Universe, has received rave reviews and is a New York Times bestseller. His second book, Spaceman: The True Story of a Young Boy’s Journey to Becoming an Astronaut (for young readers), is a National Science Teachers Association 2021 Best STEM Book Winner.