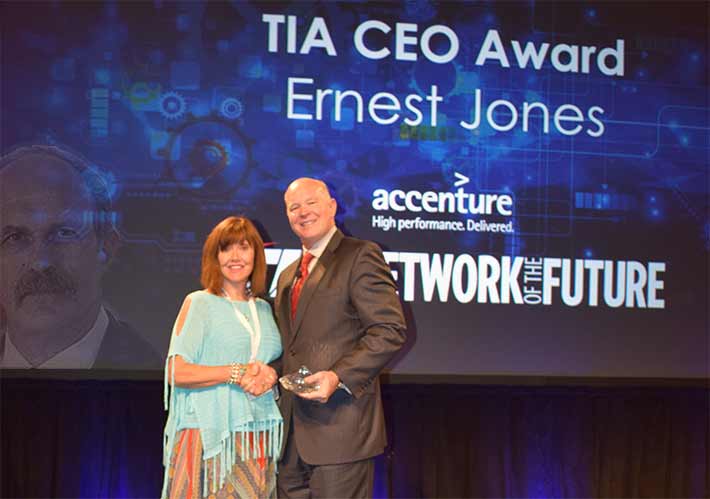 On Tuesday evening during the Telecommunications Industry Association’s VIP Dinner in Dallas, Tex., TIA CEO Scott Belcher presented the organization’s first TIA CEO Award to an industry leader who wasn’t in attendance, but was in the indelible and kind memories as well as the hearts of an overflow group of friends and associates who gave a long standing ovation to that man – Ernest ‘Ernie’ Jones.

Jones, 64, of Lynnville, Ind., a structural engineer, who passed away Oct. 21, 2015 while inspecting a tower in Oklahoma City, Okla., had a long history with TIA and he was a tireless worker for the communications industry, Belcher said.

Jones was a driving force to broaden TIA standards to include safety, standardized construction nomenclature, and established rigging plans.

His contributions to the TR-14 committee research included details which created the strength theory incorporated into industry standards.

He was always willing to discuss safety, engineering and any aspect of the tower industry with his peers.  As great as his engineering capabilities were, Ernie’s greatest contributions were his willingness to engage with any party regarding all manners of topics – especially safety – and consistently maintain a high level of integrity, courtesy and respect.

Belcher said Jones was genuine, professional and deeply respected by all who knew him, and his contributions to the tower industry will forever be remembered. He also noted that that the ANSI/TIA-322 standard will be dedicated to Jones.

The award was presented to his wife, Kathy, who said, “Ernie Jones had a passion for hard work and making things better whether it was a barbed wire fence, a two-year old thoroughbred colt or a tall tower. He was dedicated to improving safety conditions in the tower industry. Ernie was a brilliant man, a humble man, and an honest man, and the most wonderful husband, father, papa and partner. Ernie would be honored to receive this CEO reward.”

Kathy told Wireless Estimator that Ernie’s recognition was extremely rewarding and gratifying, and what Ernie accomplished during his lifetime, “is simply amazing.”

When she went on stage and looked at the 900 or so attendees filling every table, Kathy said she had to take a moment to compose herself. “There are so many good memories.”