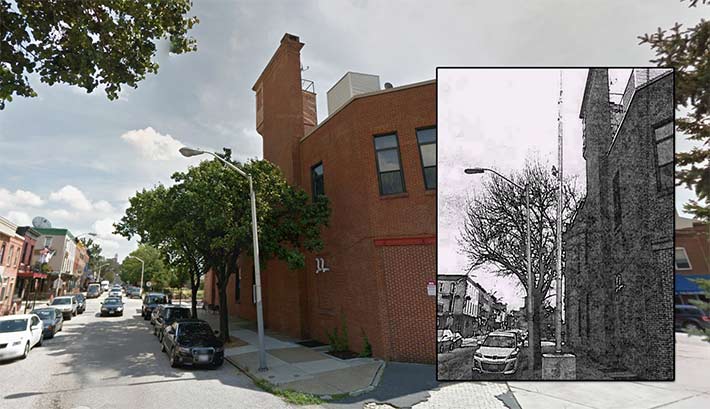 A Mobilitie subsidiary, Mobilitie Intelligent Infrastructure, was fined $5,000 in Baltimore, Md. in April for not obtaining a permit to build a small cell pole. The inset photo was taken by The Department of Transportation for the City of Baltimore.

Sprint’s plans to deploy up to 70,000 small cells throughout the country have hit a number of permitting roadblocks, according to an article by Ryan Knutson of The Wall Street Journal published Tuesday that indicates that the Overland Park, Kan.-company is struggling to roll out its small cell densification network project.

Sprint’s primary contractor for the turnkey installations is Mobilitie LLC of Newport Beach, Calif. However, the company has seen delays as communities confront what some consider unsightly installations and authorities struggle with regulatory problems.

According to Knutson, Mobilitie says it has about 1,000 permits approved and will start large-scale installations once more are in hand.

The article pointed out Mobilitie’s common practice of using different corporate names such as the Illinois Utility Pole Authority, NC Technology Relay Networking, and Interstate Transport and Broadband. It has used similar-sounding names in at least 30 states.

The primary purpose, according to a municipal telecom consultant contacted by Wireless Estimator, is a questionable practice designed to allow the applicant to appear to be a government entity or utility.

“In some states it’s more comprehensible for a jurisdiction to work with an authority,” said Mobilitie Chief Executive Gary Jabara in the article.

In the future, the company will most often use the name “Mobilitie” in dealings with local officials, said Jabara.

Using a host of different corporate names in telecom is not new. It has been a common practice of some lease buy-out firms to assist them in obtaining ground rights.

The article identified that Mobilitie was fined $5,000 for failing to get proper permits for a pole in Baltimore, Md.

Jabara said it was an inadvertent mistake.

The small cell pole’s installation gained national attention after Wireless Estimator broke the story in April. The company that was fined was a Mobilitie subsidiary, Mobilitie Intelligent Infrastructure.