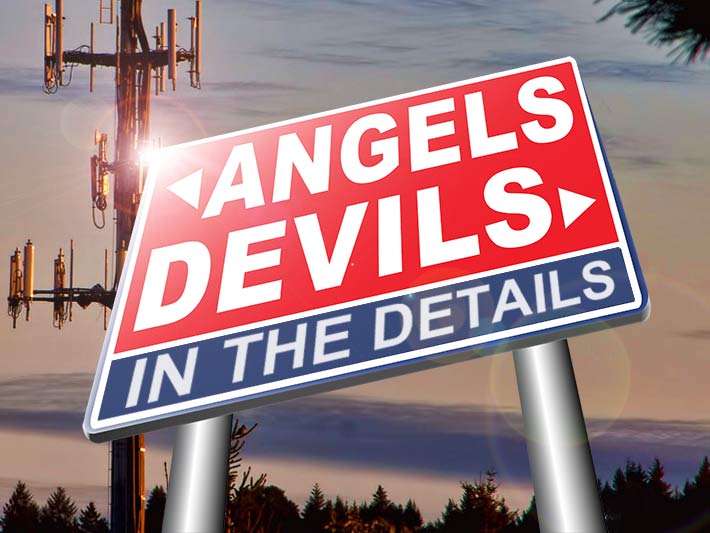 To project whether 2016 will be a banner, bust or somewhere-in-between year for wireless construction, and service and supplier providers, one has to simply search for the devil or angel that’s always in the details. Unfortunately, conflicting details and limited industry information clouds accurate projections. But the industry overall appears to be still creating jobs and there should be a robust workforce next year to tackle new opportunities as some early 5G spending trickles in.

Will FirstNet impact the industry in 2016?

It’s clear that FirstNet, the nationwide public-safety broadband network, could become a reality since FirstNet’s board has unanimously approved the release of a request for proposal (RFP) expected early this month. Nevertheless, don’t start popping the champagne corks.

FirstNet is not a shoo-in, however, since its $7 billion in funding isn’t nearly enough to roll out the network, and one or more private-sector partners are going to have to be successful in meeting FirstNet’s 16 core objectives.

There will be no financial impact upon the industry in 2016 since bids will not be due until May, and, according to FirstNet CEO Mike Poth, the bidders’ proposals might take until the end of the year to evaluate.

The FirstNet network is based on networks that are operational today across the country, and it uses LTE, a technology that has become the new standard for broadband wireless.

Bidders will be contacting tower owners, contractors, suppliers and OEMs over the next few months, and at that time a clearer picture will begin to emerge as to how the industry will benefit from the build-out.

There appears to be no need to ramp up at the end of 2016 to support the initiative since there is a possibility that it may not move forward until the latter half of 2017. Some analysts believe that it could even be later in 2018 until anything is shovel ready.

Sprint isn’t ready to throw in their telecom towel

Sprint hasn’t had too many contractors and suppliers this year doing high fives as it stalled its LTE buildout and failed to exploit its spectrum holdings. It has, however, been a staple for a number of companies who are still handling their limited work.

Media last month grabbed the Kansas City Star’s headline that Sprint severance and other job cutting costs will hit $150 million, adding fuel to some writers and bloggers’ posts that the carrier is in trouble.

What they didn’t state is that most of the workers being laid off are in positions that will not delay their continued network buildout. In fact, the company is currently looking to hire 40 additional RF engineers.

The Bolivian born rainmaker will most likely consider changing the company’s strategy of focusing on densely populated areas rather than rural regions as it continues to build out its network and allow it to stop paying its competitors roaming costs.

The carrier is also cutting network costs by switching to fiber, which will lower its backhaul expenses.

While trimming corporate fat, Sprint can still add to its network and start spending some long-overdue infrastructure dollars. As he has done with previous companies, if Claure can turn former CEO Dan Hessee’s mistakes into opportunities, the industry will surely benefit.

That is if he gets the full support of Son. According to The Wall Street Journal on Dec. 23, 2015, Sprint spent heavily for advice that he later brushed aside. Claure spent at least $25 million for guidance that the carrier largely never used, and which was shelved earlier this year after Son disagreed with some of the ideas.

Claure was reportedly seeking approval for a $25 billion network plan.

A large shot in the arm for some companies such as Mobilitie is Sprint’s deployment of thousands of small cells.

Over the next four years, estimates for DAS builds run from $18 billion to $24 billion. The cost for installation is pegged at approximately 20% of the total site cost, according to Thinkbox Technology Group.

To remain relevant to the carriers, the wireless infrastructure industry must also get involved in small cells, interconnectivity and backhaul.

Verizon and T-Mobile, according to multiple contractors and suppliers, will continue spending similar or more on their network in 2016 as they did in 2015.

Although many media outlets picked up a Bloomberg article last month that said the two carriers had cut capital spending this year an average of $8.1%, signaling an ominous spending outlook for 2016, many of the spending cuts were capital expenses for items like new equipment and buildings, and were not identified as planned network builds that industry contractors and suppliers are reliant upon to succeed.

A larger portion of the downward trend was in telephone switching and Internet-routing hardware.

A Midwestern contractor said that his Verizon and T-Mobile work was exceeding 2015’s start and he was looking to hire new employees to handle the workload.

T-Mobile’s nationwide network is still second rate to those of Verizon and AT&T, according to a survey released by JD Power earlier this year, and will need to develop it to increase its subscribers.

A Pacific supplier and manufacturer said that he expects business in 2016 to be approximately 25% higher.

American Tower is benefitting the most from Verizon’s network development since it bought the carrier’s towers earlier this year.

Also, Verizon, credited with having a network which has a dominant presence across the country, is being  touted as the carrier that would be well-suited for FirstNet’s public safety network.

As with Sprint, AT&T has many contractors that have been kept busy throughout the year with site acquisitions, audits and new site construction and overlays.

AT&T CEO Randall Stephenson has said that there will be a continued downward pressure on the company’s capital spending, but that doesn’t necessarily mean that new site builds and network upgrades will be squeezed, but gearmakers like Alcatel-Lucent and Cisco Systems Inc. might be in the carrier’s belt tightening.

A polar opposite of Sprint, AT&T has one of the industry’s strongest balance sheets. And it may be considering increasing its projected $17.5 billion capital expenditure.

“If AT&T ramps up, that would certainly make our year,” said a California contractor.

Based upon supply and demand, it’s a given that next year’s TV spectrum incentive auction will be very profitable for tall tower installation contractors and antenna manufacturers, but how much work will be available in 2016 is unknown.

The report also stated that it could only identify 13 tower construction company resources available to complete the installations. Although there are a few more that were not mentioned in the report, the total is still south of 20.

Other possible delaying factors, according to the study for not throwing a sweet 16 party, included the time required for obtaining zoning and building permits, negotiating tower lease modifications and dealing with the bureaucracy associated with federal and state-owned lands where some broadcast towers are located.

Not covered, but important is that tower owners will have to follow the newest design code and they may already be in excess of the structure’s capacity, requiring time-consuming retrofitting.

It is unlikely that much repacking work will be done in 2016, unless owners are proactive and start taking down some of the unused analog antennas that are still on some towers. The industry will surely ring in 2017 with ka-ching, but a major concern is that the pressure to get the work done could result in unqualified crews taking on exacting disciplines they’re not trained to perform.

For companies that don’t rely upon the big four

Many companies refuse to be a captive contractor of carriers and over the years have been quite successful making their niche in government and utility opportunities.

They most likely will see an increase in business in 2016 as the Department of Homeland Security opens up its wallet to pay for surveillance towers and other communications infrastructure from its proposed 2016 discretionary funding of $41.2 billion. The Integrated Fixed Tower program is the federal government’s latest attempt to create a “virtual fence” to secure the border.

Also, millions of federal dollars will be granted to municipalities for their emergency communications systems, many of them having to deal with legacy towers that can’t support additional antennas.

And, if some states opt out of FirstNet’s network, there will be additional opportunities if they can show that they’re able to build their own compliant network.