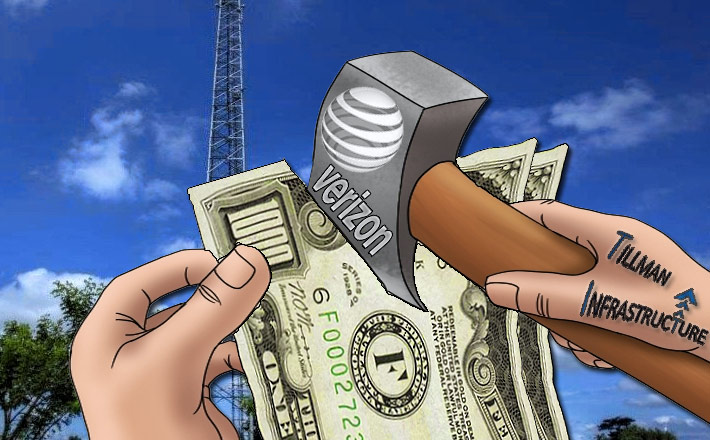 In a move clearly positioned as a threat to major tower owners to lower their lease rates, AT&T, Verizon and Tillman Infrastructure announced a joint agreement today to build hundreds of cell towers, with the potential for significantly more new site locations in the future.

Last year during an investors conference, Bill Hogg, AT&T’s president of technology operations, said that the tower model is “not really sustainable”. During the past year Tillman has been contacting property owners to lease land for new sites near existing structures where AT&T is a tenant.

This is the first time that AT&T has joined with Verizon to pressure towercos. However, the shot across their bows may not be too frightening if only a couple of hundred towers across the nation are at risk.

Although Tillman, which describes itself as “a disruptive US Telecom tower builder and operator,” doesn’t have many structures in America at this time, its parent company, Tillman Global Holdings, owns Apollo Towers based in Myanmar and has a portfolio of close to 2,000 towers.

Tillman has agreed to a build-to-suit construction agreement with AT&T and Verizon, which have committed to leasing and co-anchoring the co-located towers.

These new structures will add to the overall communications infrastructure in the US, and will fulfill the need for new locations where towers do not exist today, a Verizon press statement said.

“We continue to focus on technology innovation and investing in the latest software platforms to provide the best possible customer experience on our network,” said Nicola Palmer, Chief Network Officer for Verizon Wireless. “At the same time, it is imperative to reduce operating costs. We are reviewing all of our long-term contracts as they come up for renewal and we are excited to develop new vendor partners to diversify our infrastructure providers.”

“We need more alternatives to the traditional tower leasing model with the large incumbents. It’s not cost-effective or sustainable. We’re creating a diverse community of suppliers and tower companies who will help increase market competition while reducing our overhead,” said Susan Johnson, SVP of Global Supply Chain, AT&T. “We look forward to working with Verizon as we establish site locations and sign new lease agreements with additional suppliers in the coming years.”

It is not known how many new FirstNet towers AT&T will award to Tillman if Verizon does not require a new structure at the underserved AT&T location since it is likely that a single tenant site would be unprofitable, especially with lower lease rates that have been offered by Tillman.

“Tillman is excited about the opportunity to work with AT&T and Verizon in order to further develop the cell tower model of the future,” said Suruchi Ahuja, CFO of Tillman Infrastructure. “Over the past year we have built a strong team at Tillman and are committed to rapidly building a leader in wireless infrastructure in the U.S. in order to best serve carriers and the broader communities in which we will enable connectivity.”

Last September, AT&T was in a full-court press to force tower owners to take new restrictive terms or the carrier might relocate to an alternative site.