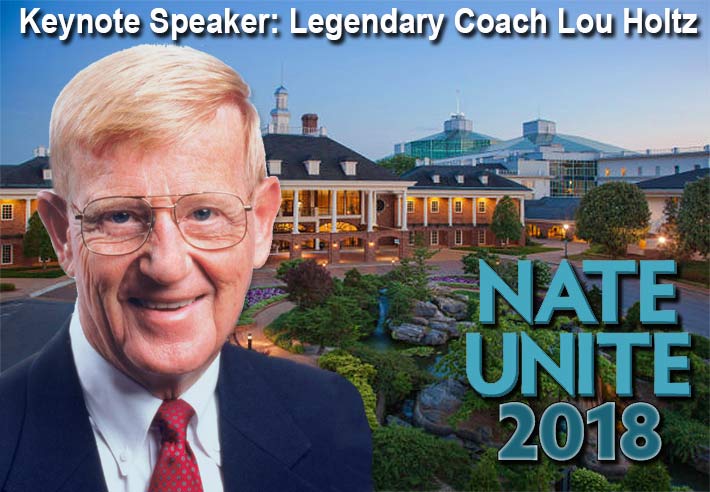 The National Association of Tower Erectors (NATE) announced today that legendary college football coach, prominent motivational speaker and best-selling author Lou Holtz will deliver the keynote address at the NATE UNITE 2018 Conference in Nashville, Tenn.  NATE UNITE 2018 will take place February 19-22, 2018 at the Gaylord Opryland Resort. NATE UNITE is widely regarded as the premier and most comprehensive education event in the wireless and broadcast infrastructure industries. Holtz is slated to speak during the NATE Keynote Luncheon on Tues., Feb. 20, 2018.

“The Association is thrilled to welcome an accomplished leader and icon like Lou Holtz to NATE UNITE 2018,” stated NATE’s Trade Show Committee Chairman Joel Hightower of Hightower Communications, Inc. in LaGrange, N.C. “Coach Holtz is widely-regarded as one of the best inspirational speakers in the United States and I am confident he will deliver a memorable and impactful keynote address at the conference,” added Hightower.

Lou Holtz became the 27th head coach of Notre Dame following two seasons at Minnesota (1984 to 85), seven at Arkansas (1977 to 83), four at North Carolina State (1972 to 75) and three at William & Mary (1969 to 71). He also spent the 1976 season as head coach of the New York Jets of the National Football League. Twenty-one of the 26 collegiate teams under his direction have earned post-season bowl invitations—and 14 have finished in the final AP top 20, eight in the top 10 (not including the 1995 finish in that category).

Holtz served as a college football studio analyst on ESPN from 2004-2015. He appeared on ESPNEWS’, ESPN College GameDay programs, SportsCenter as well as an on-site analyst for college football games.

Holtz has also authored three New York Times best-selling books: The Fighting Spirit that chronicled Notre Dame’s 1988 championship season, Winning Everyday: A Game Plan For Success and the most recent book Wins, Losses and Lessons, an autobiography of his life and the lessons he has learned.

“Lou Holtz’s keynote appearance at NATE UNITE 2018 will serve to enhance what is already an incredible line-up of speakers, sessions, luncheons and receptions that we have in store for the industry,” said NATE Events Coordinator Shari Wirkus. “NATE UNITE 2018 is the premier event of the year for companies and stakeholders representing all facets of the diverse wireless and broadcast infrastructure landscape,” added Wirkus.