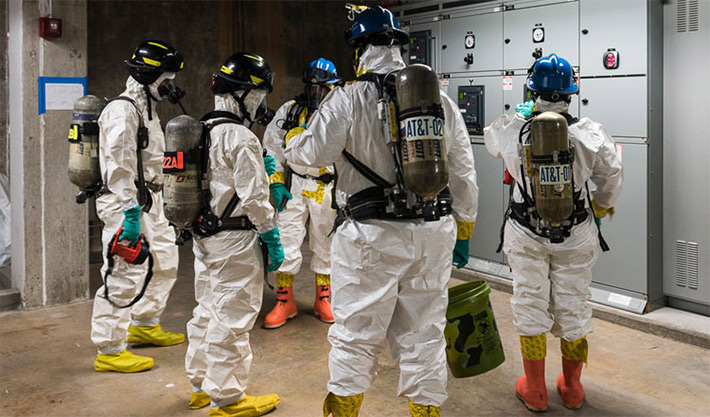 Hurricane season officially kicks off on June 1, and the National Weather Service says an average of three hurricanes hit the U.S. coastline every two years.

But each one carries with it different catastrophic results and AT&T says it wants to be prepared for all scenarios, and goes through a number of exercises that put their Network Discovery (NDR) team and assets to the test, most recently wrapping up their first NDR exercise of the year in Houston.

“We deployed six technology recovery trailers, a satellite COLT (Cell on Light Truck), a mobile command center and an emergency communications vehicle. We practiced restoring network service as if there was a real-life disaster,” said Chris Sambar, Senior Vice President, AT&T – FirstNet, in a blog.

“We also displayed our new Helicopter Flying COW (Cell on Wings, pictured here). It has a 7.5-foot diameter rotor and 2 cellular antennas. In the future, our NDR team hopes that the Helicopter Flying COW will go into areas where a traditional Cell on Wheels can’t go: like areas with hurricane damage or flooding,” said Sambar.

The Houston Fire Department joined AT&T’s exercise for a hazardous materials training drill where they assessed damage and checked the environmental conditions in the generator room and cable vault of a mock “contaminated” AT&T Central Office.

In the event of a disaster, Sambar said they need to know how to best mobilize their people and network technologies as well as how to best collaborate with public safety. Among other things, these exercises help them to learn and adapt our strategies for providing connectivity when disasters strike.

“With our public-private partnership with FirstNet, we’re preparing to make even more network technologies available to first responders. We plan to add 72 Satellite COLTs to our fleet to support the FirstNet network. These will be dedicated to first responders and their specific needs during sustained situations where coverage may need to be strengthened. Think search-and-rescue operations following a storm,” Sambar said.

Another key feature AT&T brings to public safety is priority and preemption on the network.

“We’ll be making these services available to public safety across all AT&T LTE bands. This includes the coverage provided by our NDR technologies. With respect to deployables, this means first responders will be able to take advantage of our full fleet of NDR assets to best support their emergency communications needs. In total, first responders will have access to more than 700 pieces of equipment – including COWs, COLTs, trailers, generators and more – which can be used in the event of a natural disaster or other crisis,” said Sambar.