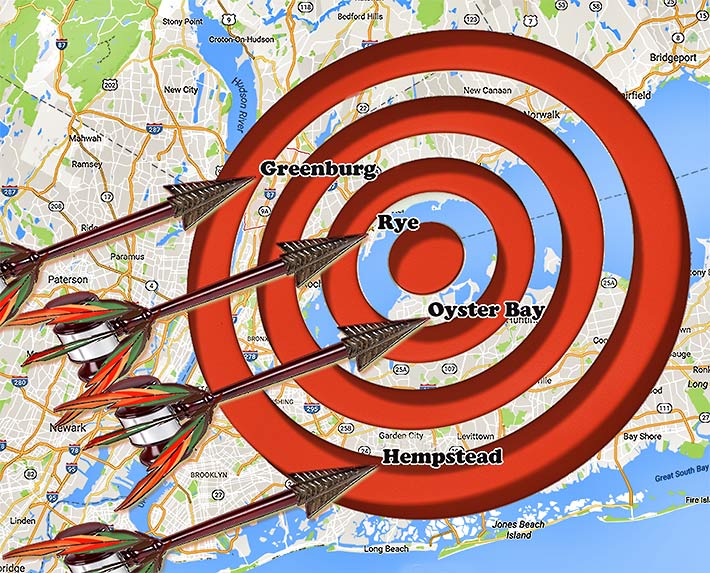 Crown Castle has fired off a quiver of lawsuits regarding their public rights of way projects in Southeastern N.Y.

Crown Castle filed another lawsuit in federal court on Thursday against the Town of Oyster Bay, N.Y. seeking to have its permits reissued to install microcells in residential neighborhoods.

The action follows a recently filed complaint against the Town of Hempstead as reported by Wireless Estimator on Friday where Crown Castle sued over a consultant’s delaying tactics and high fees for DAS nodes that the town was charging.

They said the order was illegally based on the alleged fear of the environmental effects from radio frequency emissions which is prohibited by federal law. Through the town’s actions, the lawsuit said that Oyster Bay also violated the shot clock rule.

Crown Castle claims that after it had approval for 22 of 24 applications, they began installing equipment, as approved, in the town’s rights of way, but residents came out in droves complaining about the equipment and they voiced unfounded fears over environmental effects and health risks from RF emissions.

Crown Castle said it again provided the town with documentation that the facilities would comply with all FCC rules and regulations regarding RF emission.

On May 9, there was a Town Board meeting, and Crown Castle said they were not made aware of it and were not in attendance.

As identified in a video of the meeting, Crown Castle claims that Town Supervisor Joseph Saladino said, regarding RF, “we are going to take the position that the federal government based their law on a 1996 study,” and explained that he had done his own research on RF emission. “I have done the research, I saw the findings of the American Cancer Society.”

Crown Castle said that Saladino showed his clear but contemptuous understanding of federal law when he stated: “we are stopping giving permission to access Town property, even though the federal government says we have to.”

According to the lawsuit, Saladino even further stated his refusal to follow the federal law by stating, “It’s not the Town of Oyster Bay’s law, it’s the federal government’s law. We challenge that law.”

At the close of the discussion regarding Crown Castle’s telecommunication facilities, Saladino ordered a Town Commissioner to “revoke or stop any permit that has been previously issued.”

Saladino then posted on the Town’s website, in part, “We need to complete the research to present any potential risks to children, pregnant women, and our communities at large. We must provide state of the art and cutting edge information on this subject and the process must begin immediately. The Town of Oyster Bay will not allow an outdated law and outdated research to have a potentially negative effect on the health of our residents.”

During the past seven years, Crown Castle has installed over 100 DAS nodes in the town.

Crown has fought similar issues for a number of years
In 2014, the U.S. Court of Appeals for the 2nd Circuit affirmed that the Town of Greenburg had unlawfully denied Crown Castle’s application to install a 20-node DAS system in the public rights of way.

The court rejected the town’s claim that Crown Castle had not demonstrated a need for the facilities as required by their code, and that the company was building on speculation and only had  a single customer.

Last month, Crown Castle sued the City of Rye in federal court stating the city wrongly refused to allow it access to public rights of way to expand its DAS system.

From 2011 to 2015, Crown Castle said it installed systems on poles owned by Consolidated Edison Inc. without a problem from the city, but when they asked the city to expand the agreement so that they could expand coverage in “historically poor wireless service” area, the city “bowed to pressure from a small but highly vocal group of citizens” and even hired outside counsel to come up with ways to circumvent the company’s requests, according to the complaint.