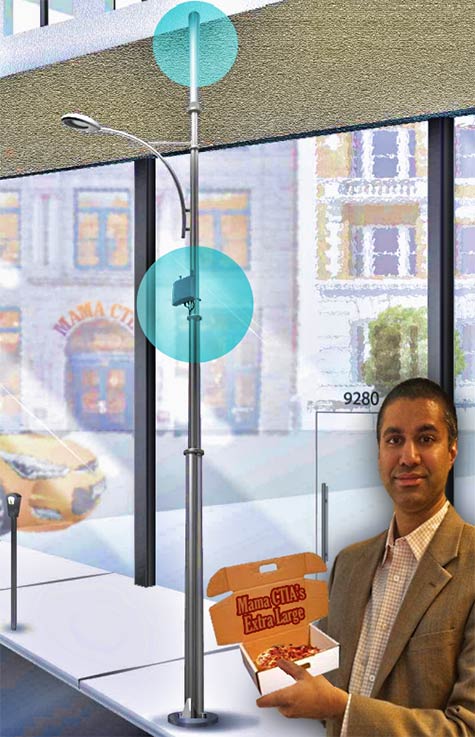 It’s likely that Bender fully understood their presentation on new opportunities and challenges laced with small cell vernacular since she has been entrenched in the industry for the past nine years through positions with TIA and Comcast, as well as serving as Senior Policy Director for Mobile Future.

It’s also presumed that she knows how big a pizza box is.

In the CTIA presentation, the trade group said that networks can now be extended on common structures like street lights and utility poles and that there will be 300,000 “pizza box-sized small cells needed in [the] next 3-4 years.”

But in their graphic it appears that they were selling more sizzle and a smaller sized steak.

Their street lights, normally 25 feet or more in height, appeared to be 15 feet or less, and their pizza box-sized antenna was a Lilliputian snack that a DAS technician could easily waterproof with a sandwich bag.

CTIA believes that the FCC’s challenge is that existing processes for reviewing applications for wireless sites have not kept pace with advances in the size and scale of next-generation infrastructure and suggests that the agency should declare that small facilities deployments have no adverse impact.

Leagues of municipalities disagree, having previously informed the FCC that they are concerned about companies running roughshod over any semblance of aesthetics, and have provided photographs of unsightly installations.

Graphically presenting small cells in a favorable light is a common endeavor, especially for DAS-provider Mobilitie.

In February, Dr. Jonathan Kramer, an attorney whose practice involves wireless siting and telecommunications law, took exception to Mobilitie’s level of accuracy regarding their graphics when planners were asked to consider projects that affect community aesthetics.

In addition, WIA said,  the term small wireless facility means an installation on a pole or other support structure in the right-of-way that is no greater than 50 feet above ground level or 10 feet in height above the tallest existing utility pole within 500 feet of the installation, whichever is greater.

In a recent filing with the FCC, the City of San Francisco said, “There is nothing ‘small’ about the small cell facilities WIA believes its members should be permitted to install on utility poles with little or no local government review or control. Moreover, the Commission must not lose sight of the fact tha tunder Section 6409(a) of the Spectrum Act local governments would be required to approve requests to increase the size of these permitted facilities.25 For that reason, the size of an approved small cell could be readily increased without any local government control. The Commission should not approve a standard that would grant WIA’s members virtually an unfettered right to decide what equipment is appropriately installed on utility and other poles in the public right-of-way.”