In a statement, Mayor William Milbrand said, “I knew that I did nothing wrong, but I also knew that some members of the Shamokin Police Department were angry at me and they tried to use the criminal system against me.”

All site acquisition and tower site developers can easily regale their fellow professionals at conferences with their ‘site from hell’ description where unexpected events had them shaking their heads in disbelief. 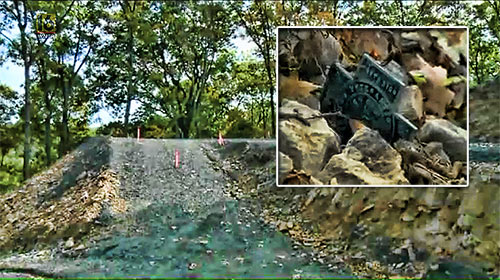 The Mayor of Shamokin, Pa. was arrested after being charged with vandalizing a cemetery after he reportedly knew that a new road and compound would require burying graves. A veteran’s marker (inset) was found alongside the road. The site is still waiting for NEPA and SHPO approval.

Thirty-year industry veteran Fred Papa, Vice President of Try-MAC Towers of Southern Pines, N.C., has his purgatory memoir, and it surfaced again when he received a call today that the landlord for his 199-foot tower site, the Mayor of Shamokin, Pa., was arrested and arraigned yesterday on 42 counts, including 14 felonies of institutional vandalism of a cemetery, with the remainder being misdemeanors.

The local police allege that Mayor William Milbrand knew that an existing road and tower compound that was being built at the Shamokin Cemetery, where he also serves as its President, would require it to be built over graves and he either directed it or gave tacit approval.

The Shamokin police said that they had documented 14 graves using burial records and cemetery maps published online. Police said that their photographic evidence backs the allegations. They also said that a site sub-contractor of Try-MAC Towers, Tim McAndrew of TM Services, claimed he graded and prepared the area under Milbrand’s direction and was paid $15,000 by Try-MAC. 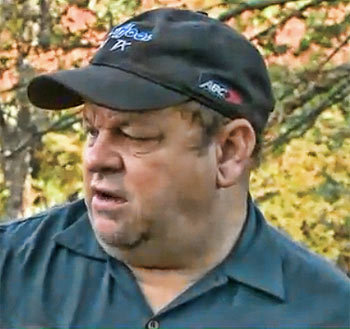 Mayor William Milbrand, who owns a local tour bus company, Catawese Coach Lines, was elected as mayor in 2013 by one vote. Milbrand, a Democrat, has served the community in numerous roles and was its former fire chief. As a councilman he was the city’s director of public safety.

During his arraignment, Milbrand said that their allegations were not true. “If there were graves disturbed, it was unknown to me,” Milbrand told The Daily Item. He was released on $20,000 unsecured bail.

Mayor visited construction site almost daily
In July, according to an interview with WNEP, Milbrand said, “There are no graves being disturbed whatsoever. We got a little close to one up there, but I’ve been here on site almost every day.”

Papa informed Wireless Estimator that he had been looking for a site for his client, Limitless Mobile, and contacted Milbrand to identify if any city sites might be available.

“We found one site and after we did a geotech boring we hit a mine shaft. That’s when the Mayor offered the property at the cemetery,” said Papa.

Papa said that an access road was already in place and other than enlarging two small switchbacks where there were no graves, the excavation was limited. “It looked like virgin property,” he said.

Papa informed Wireless Estimator that he believes that Milbrand has been ensnared by local politics. He said that Milbrand appears to be an honest individual whose “best interests of the cemetery are well known.”

He said that claims of damaging and  burying the grave sites will eventually be proven to be untrue.

Construction was halted in October when Shamokin resident Joseph Leshinskie, who announced his intentions to run for mayor in 2017, called for city involvement after being contacted by concerned citizens who believed graves had been disturbed in the access road construction.

On his Facebook page he said, “Some tombstones are just thrown over the embankment when replaced, but these graves were bulldozed over and destroyed during construction.”

GPR survey showed no burial plots
Aware of the charges and growing media attention, Papas said he hired Hillis-Carnes Engineering Associates, Inc. to do a ground penetration radar survey (GPR) and their report came back that there was no evidence that any unmarked burial plots existed in the area of the proposed tower compound or the constructed site access roadway.

The depths surveyed ranged between 6 and 10 feet below the current site elevations. The report stated: “The only burial plots observed during the scanning were clearly represented by headstones or burial plaques.”

Although numerous media reports said that the tower had been built or the installation of the tower was halted due to the possibility that the survey was not correct, Papa said the self-supporting tower hasn’t been erected.  “We’re still waiting for NEPA and SHPO compliance reports,” he said.

Papa said that last year when he learned of a couple of residents’ complaints, he visited the site with Milbrand and did see a grave marker at the side of the road base in between large pieces of rock, “but it appeared to have been placed there following the road construction,” he said. He also heard that it may actually have come from a different location in the cemetery.

Numerous reports had been made regarding headstones being vandalized throughout the years, according to news reports.

According to Papa’s agreement, the  tower would generate $900 monthly for the cemetery — money Milbrand said would have been used for upkeep at the graveyard that is annually overrun with grass and weeds.

Milbrand said the cemetery board lacks the funds to keep up with maintenance.

The cemetery, privately owned by Shamokin Cemetery Co., sits on 20 acres and has 16,000 burials.

The preliminary court hearing for Milbrand is scheduled for Feb. 7.

Original anchor tenant goes bankrupt
While Papa was doing everything possible to get Limitless Mobile to start providing service to Shamokin through a federal grant, the company filed for bankruptcy; however, Papa said, he has since acquired an anchor tenant for the site.

Try-MAC has a number of other sites where Limitless was a tenant.

On Jan. 20, the  bankruptcy court agreed to a revised motion to reject the leases of Limitless. It stated, “For each Lease, any Tower Equipment remaining on or at the Tower or the associated premises is hereby deemed abandoned pursuant to section 554 of the Bankruptcy Code, effective January 30, 2017.”

Try-MAC and many other tower owners can now remove and otherwise dispose of abandoned Limitless equipment on their sites.

Papa said that although there might be costs related to removing some of the equipment, salvageable mounts, equipment pads and other assets they will now own should compensate for it.