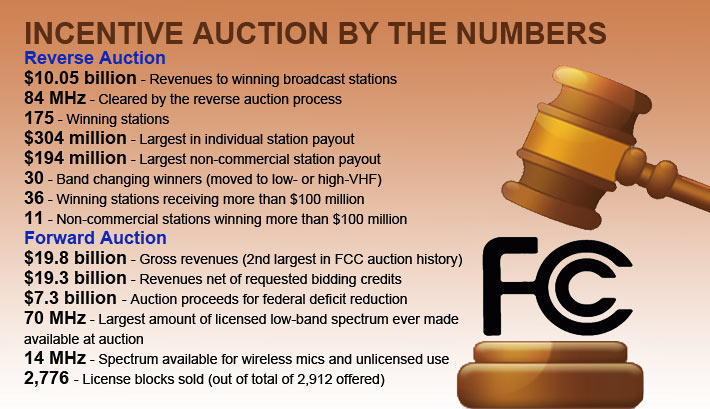 T-Mobile, Dish Network and Comcast were the top bidders in the incentive spectrum auction for 70 MHz of airwaves, according to an FCC announcement that will now jumpstart the nation’s long-awaited repacking efforts.

The Commission now commences a 39-month transition period to move broadcast stations to new channel assignments. The first group of stations to move channels is scheduled for Nov. 30, 2018.

AT&T picked up 23 licenses for $910 million, U.S. Cellular acquired 188 licenses for $328 million. Sprint did not participate and Verizon did not win a license. Two carriers’ absence, and the strong showing from companies like Comcast that don’t currently operate cellular networks, is a sign of the changing telecommunications landscape.

To view the winning bids, click here.  The bidder summary is available here. And the FCC’s bidder payment/refund is here.

FCC Chairman Ajit Pai said, “The conclusion of the world’s first incentive auction is a major milestone in the FCC’s long history as steward of the nation’s airwaves. Consumers are the real beneficiaries, as broadcasters invest new resources in programming and service, and additional wireless spectrum opens the way to greater competition and innovation in the mobile broadband marketplace.”

Twelve stations said that they plan to stop over-the-air broadcasts, according to FCC officials.

More than $10 billion will go to 175 winning broadcasters that elected to participate in the incentive auction and repurpose their airwaves for mobile use. Of the winners, 30 stations will receive money for agreeing to move to a lower channel and 133 others will relinquish their licenses and indicated their intent to remain on air through channel-sharing agreements with non-winning stations.

“Releasing the Closing and Channel Reassignment Public Notice finally removes the speculative rumors about its outcome and lets everyone start planning for the future. Moreover, it initializes the ability for the Commission and others to conduct substantial analysis regarding the auction structure and procedures. The many steps that remain to actually complete the auction — including repacking the broadcasters and releasing this spectrum to forward auction winners — must be done thoughtfully and carefully,” said Commissioner Mike O’Reilly.

“WIA congratulates the winners of the FCC’s 600 MHz spectrum auction, and our members stand ready to deploy new infrastructure and activate mobile technologies that will use this spectrum as it comes online. Increasing the amount of spectrum available to wireless providers benefits consumers and will lead to greater economic development in communities around the nation,” said Wireless Infrastructure CEO and President Jonathan Adelstein after the FCC made its announcement.

Representatives of the National Association of Tower Erectors (NATE) were in Washington D.C. last week meeting with a number of agencies and government representatives. One area of discussion related to how NATE members are addressing the repack efforts.

The FCC announced this week its current count of broadcasting stations.