Two of the men posing as police and robbing drivers were identified on security cameras. Police found a cache of electronics and other equipment, including 15 portable radios, nine scanners and nine handheld microphones in one of the suspects’ homes. One of the men, Jay Peralta, was fined $404,166 by the FCC, but that’s the least of his worries.

The FCC issued a notice of apparent liability (NAL) on Friday to a 20-year-old New York resident for operating a radio transmitter on frequencies that the Commission has licensed to the New York Police Department, fining him $404,166. And although the enforcement message was clear, collecting the fine is uncertain. 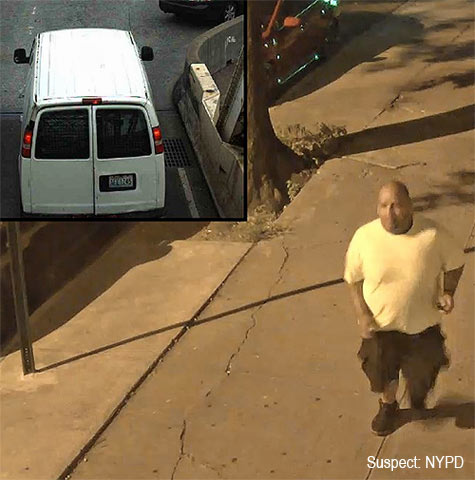 Police suspected that the man in this surveillance photo was one of the three suspects. They also thought that the above van was used in the robberies.

It’s doubtful, however, that the FCC will even see the trailing $166 of its $404K fine since the 6’-1”, 260-pound Peralta barely has enough money for Kaopectate from the commissary to quell the heartburn attached to the possibility of a 20 years or more prison sentence.

FCC Chairman Ajit Pai said that he was grateful that his fellow Commissioners agreed to act  swiftly and strongly in the matter. He said that within the realm of public safety, “the FCC has no higher purpose than promoting secure and reliable public safety and emergency response communications.”

Whereas FCC inspectors often locate violators through tracking equipment, officers of the 114 Precinct caught Peralta, Ricardo Torres, 29, a ham radio enthusiast, and Kevin A. Remache, 19, in September and arrested them after they reportedly robbed a 39-year-old male.

Officers say they were wearing vests, and when they stopped Torres he was carrying two radios capable of transmitting over police frequencies, and he had a flashlight with the word “police” inscribed on it.

Following an investigation, it was later found that the three men, described as Hispanic, were responsible for a number of other robberies where they dressed as officers, with their radios transmitting police conversations to add credibility to their authority.

After pulling people over in their vehicles, they sprayed them with an unknown substance in the faces and robbed them in Astoria, Long Island and the Bronx.

Investigators also found that Peralta had previously made phony calls for assistance by non-existent officers, a report of a pressure-cooker bomb in front of a residence, fake gun runs and threats against the lives of officers.

In one of Peralta’s broadcasts he threatened to kill a police captain, stating, “I’m gonna put a bullet in your head, I hope you know that.”

He also stated he made “10-13” (Officer Needs Emergency Assistance) and “10-85” (Officer Needs Assistance) calls. The 10-13 code is more serious and represents a “radio call for officer assistance during which all non-priority radio transmission must be suspended.”

The NYPD obtained a search warrant from a New York court for Peralta’s residence and seized a radio and tactical vest in his home.

The FCC’s proposed forfeiture for each one of the 21 violations was the maximum amount allowable, $19,246.

Peralta has 30 days to pay the fine or he can ask the FCC for an installment plan. He can also ask the FCC to reduce the fine forfeiture by claiming he is unable to pay. That request must be accompanied with his most recent three-year period of tax returns.

If he does, it is unlikely that he has detailed his miscellaneous income.

In February, Pai instituted a process reform measure in the FCC that will handcuff his Enforcement Bureau chief so that Commissioners will become more fully involved in the agency’s enforcement activities. 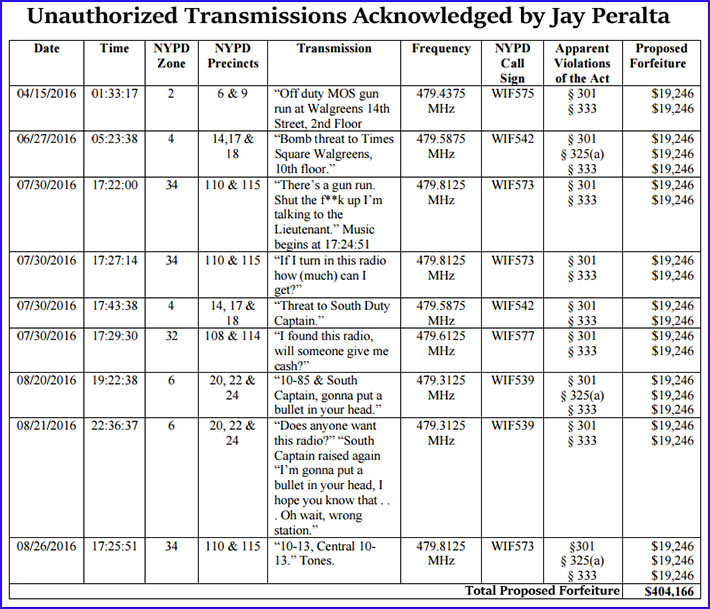