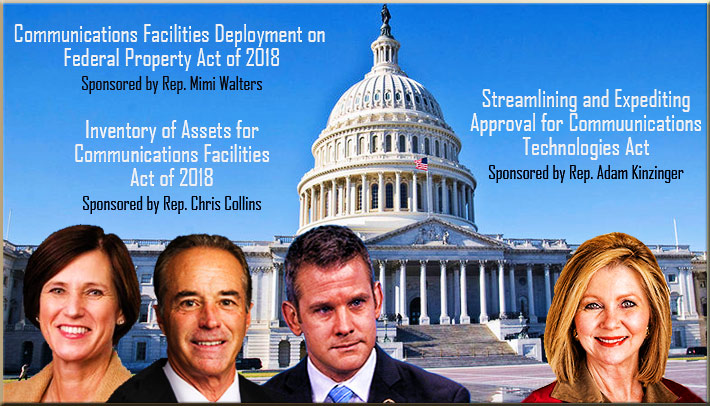 The bill would amend Sec. 6409 of the Middle Class Tax Relief and Job Creation Act (47 USC 1455) to require executive agencies to use common application forms and cost-based application fees for easements, rights-of-way, and lease requests, and master contracts for placement of communications facility installations on federal property;

Requires the General Services Administration (GSA) to coordinate with the National Telecommunications Information Administration (NTIA) to ensure federal agencies include an inventory of assets that can be used to attach or install broadband infrastructure.

This inventory would be available to communications providers, and include a description of assets, their locations, and a point of contact from each agency for more information on a given asset.

The bill would require the Senior Real Property Officer of covered agencies to track, record, and report on specified data on the applications to locate or modify communications facilities on covered, federal assets.

Each agency’s Senior Real Property Officer would be required to report annually to NTIA on its progress, and NTIA would report to Congress.

“Right now, there are far too many barriers deterring broadband companies from expanding in rural communities. It’s expensive, time-consuming, and complicated,” said Blackburn. “That’s why it’s so important this first round of bills is tackling the issues head on.”

Jonathan Adelstein, President and CEO of WIA, said, “These three pieces of legislation take direct aim at specific barriers facing responsible deployment of wireless infrastructure throughout this country, especially on federal lands and property. These bills will help infrastructure builders deploy next generation networks. Many members of the Subcommittee on Communications and Technology understand how critical it is that Congress continue its work to create a more predictable business environment for the wireless industry. We look forward to working with the sponsors of these three bills and Chairman Marsha Blackburn in the coming weeks.”