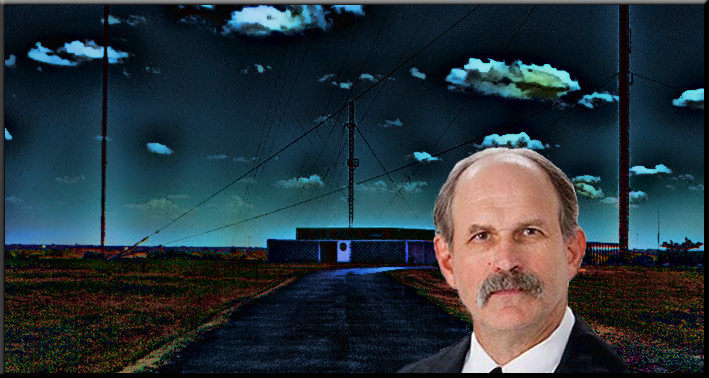 Ernie Jones, 65, was inspecting the tower, at right, when he started to descend in the elevator, but his lanyard was still tied off to the 1,430-foot structure and he was crushed to death.

The widow of a well-respected and prominent Indiana structural engineer who died on Oct. 21, 2015 when he was crushed to death between an elevator and a guyed tower’s structural members has filed a wrongful death lawsuit in Oklahoma, where the incident occurred, against the owner of the tower, the manufacturer of the structure, the elevator manufacturer, and a contractor who is alleged to have performed maintenance on the 1,430-foot KOCO TV tower located off of E. Britton Rd. in Oklahoma City.

Kathy M. Jones, representing the estate of her deceased husband, Ernie R. Jones, filed the lawsuit in July of 2017, amending it in October, alleging that while he was conducting an inspection of the tower owned by Hearst Television, due to the actions of the negligent parties, “Jones suffered severe personal injuries, including pain and suffering that resulted in his death.” 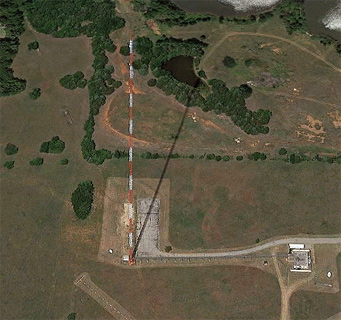 The KOCO tower was being inspected by engineer Ernie Jones when he was caught between the elevator and structure. OSHA closed their investigation after four days following the fatality.

Hearst and Combined Communications are defendants in the case, both of which do business as KOCO-TV.

However, in their initial response to the complaint, Hearst says it was the “sole negligence” of Jones that caused the accident.

Once discoveries are complete, it will be clearer as to what caused the fatality. At that time, defendants will typically ask for a summary judgment to dismiss the allegations and Oklahoma County District Court Judge Lisa Davis will rule upon their motions.

The first amended petition (FAP) also charges General Electric Company (GE) as a defendant because the tower was built by Dresser-IDECO Company, which was subsequently acquired by GE, the complaint said, but on Oct. 23, 2017, Jones dismissed the petition against GE without prejudice.

Also named as a defendant was Haliburton Company because they too were identified as acquiring Dresser-IDECO.

Haliburton’s request that they should be dismissed from the lawsuit because Jones failed to state a claim was overruled by Judge Davis on Jan. 26, 2018.

Haliburton’s counsel has stated that the death was caused “in whole or in party by the acts, omissions or defects of Plaintiff’s decedent himself…”.

Although Marshall elevator installed the elevator, the company was acquired by Otis Elevator Company which is named as a defendant in the lawsuit, and “as a direct result of the negligent installation and maintenance of the elevator in the antenna tower by Defendant Otis,” according to the FAP, Jones died.

In response, Otis said that “The allegations are legal conclusions and are not directed to Otis Elevator and therefore no response is required.”

They also stated that “By voluntarily undertaking to engage in the conduct alleged, the deceased elected to accept such possible risks of personal injury in both the primary and secondary sense, thus barring or reducing any recovery.”

In Otis’ request for dismissal, they placed the burden of liability upon the owner of the tower and the maintenance of the elevator.

Precision Communications, Inc., a small broadcast construction and maintenance company located in Grove, Okla. that is proactive in industry safety initiatives, is also named as a defendant in the FAP because the tower was alleged to be maintained by Precision, and “The dangerous, unsafe and defective condition of the subject antenna tower was a result of negligent maintenance of the tower and the elevator in the tower by Defendant Precision,” the complaint states.

In their response to the FAP, Precision stated, in part, “The decedent knew or, in the exercise of ordinary care, should have known of the risks and hazards involved regarding the occurrence which is the subject of Plaintiff’s action but, nevertheless and with full knowledge, did fully and voluntarily consent to assume such risks and hazards.”

The company also said that the “alleged hazard was open and obvious,” and the “decedent was a learned intermediary/sophisticated user”.

According to submitted documents, Precision said it did not have a contract to maintain the tower, and includes the following statement accompanying any of their reports: “The contents of this report, including the recommendations, are based on a visual condition assessment per the TIA 222 Structural Standard for Antenna Supporting Structures and Antennas, Annex J. No type of structural analysis or testing of individual components is included or implied.  The tower owner is responsible for maintaining the tower and its components and fulfilling any requirements of the FCC, FAA or any other governing body under which the tower or any of its components are subject.”

All defendants allude to Jones’ actions during the inspection as being negligent and were in a greater degree contributory to his death.

OSHA opened their investigation on Oct. 22, 2015 and closed the case four days later., most likely because Jones appeared to be the sole employee of his company, Consolidated Engineering, Inc., mitigating certain OSHA requirements such as completing a job hazard assessment report for the KOCO-TV tower that could have identified the alleged hazards.

However, even if Jones was not exempt, and had one or two employees, an OSHA official can elect to close an investigation if there isn’t an operating company with ownership/management that can be cited with a violation and be capable of accepting or contesting a citation following a fatality investigation.

The National Association of Tower Erectors and the Tower Family Foundation have set up the Ernie Jones Memorial Civil Engineering Scholarship. The next recipient is expected to be announced at NATE UNITE 2018 next week.  A recently introduced TIA TR-14 industry standard has a fitting tribute in it for Jones.

As a guest speaker at industry conferences, Jones had authored and/or presented numerous tower and antenna presentations since 2000.

He had been Vice President of Engineering of Electronics Research, Inc. of Chandler Ind.  for their structural division.

Although he had always been a strong and active safety advocate, following the death of two of ERI’s employees in 2011 when they were jumping a gin pole, his continued fervor for championing safety initiatives was well known by his many friends and associates.

In addition to his wife, Jones is survived by four children.