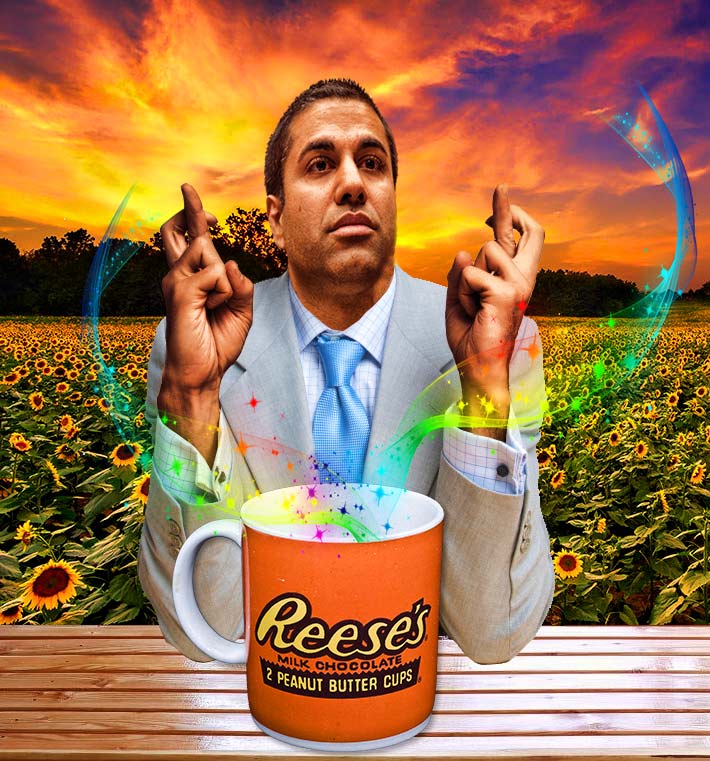 No matter what FCC Chairman Ajit Pai’s Resse’s chocolate tea leaves read, it will be unlikely that the U.S. Treasury will recoup any of the almost $50 million fine from Albert Hee for violating the U.S. Universal Service Fund rules. The agency has received a judgment in the amount of $138,557,635 against Sandwich Isles Communications, founded by Hee. It was the exclusive carrier receiving support to deploy and maintain communications networks servicing residents living on Hawaiian Homelands.

The Federal Communications Commission has fined Sandwich Isles Communications, Waimana Enterprises, and Albert S.N. Hee of Hawaii $49,598,488 for violations of Universal Service Fund program rules that resulted in millions of dollars in improper payments.  The agency issued the Notice of Apparent Liability in 2016.

However, the fine might be more emblematic than enforceable against Hee, 67, who appears to be indigent after being released from federal prison on September 19, 2019, after serving  a 46-month prison sentence after being convicted on six counts of criminal tax fraud and one count of impeding an investigation of the Internal Revenue Service.

The FCC’s fines levied against Hee will have to wait until Hee pays $442,493 in fines he owes following his conviction.

On February 18, 2020 an amended judgment was provided to the United States of America in the amount of $138,557,635 against Sandwich Isles Communications and the U.S. will be proceeding with a judicial sale of assets.

In January 2019, Hee sued in a counterclaim agaist the DoJ and FCC for more than $50 million for slander from FCC officials, including Chairman Ajit Pai, while in their scope of their employment. Pai had said that Hee “apparently used the company as his family’s personal piggy bank.”

In August 2019, the U.S. District Court for the District of Hawaii dismissed the claims.

In their statement announcing the $50 million fine, the FCC said, “Sandwich Isles was the designated carrier receiving support to deploy and maintain communications networks serving Americans living on the Hawaiian Homelands through the Fund’s High-Cost program, which is designed to ensure that consumers in rural and other high-cost areas have access to modern communications networks.”

They said that Hee used his control of Sandwich Isles, Waimana, and other affiliated companies to tap corporate funds to pay for more than $4 million in personal expenses benefitting himself and his family, including personal massages, personal travel and meals, tuition payments for Hee’s children, a vehicle and home for Hee’s children, and salaries and benefits paid to Hee’s wife and children while they did not actually perform any work for Waimana.  Sandwich Isles also used Universal Service support to pay Waimana inflated rent and management fees as well as unjustified bonuses to Hee.

In 2015, Hee was convicted of criminal tax fraud and sentenced to nearly five years in federal prison.  On December 5, 2016, the Commission eliminated Sandwich Isles’ ability to receive additional support from the Fund, took action to recover $27 million in improper payments Sandwich Isles had received, and proposed a $49,598,448 fine against Sandwich Isles, Waimana Enterprises, and Hee for its apparent violations of High-Cost program rules.

The Commission found Sandwich Isles apparently liable for the following violations: (1) filing inaccurate data in its annual cost studies; (2) falsely certifying the accuracy of the data contained within the cost studies; (3) misclassifying costs relating to its cable and wire facilities; (4) overstating the costs related to the lease of abandoned water mains; and (5) failing to keep its accounts, records, and memoranda as prescribed by the Commission’s rules.

The forfeiture order finds that Sandwich Isles, Waimana, and Hee are jointly and severally liable for the full proposed penalty of $49,598,448.

The Commission’s federal High-Cost universal support program allows eligible carriers that serve high-cost areas to recover some of their costs from the Fund to help defray the costs of building and maintaining telecommunications plant to service rural and high-cost areas.

“Given the core importance of this program to serving America’s broadband needs, the Commission has an ongoing obligation to ensure that universal service funds are used properly, and to protect the Universal Service Fund from waste, fraud, and abuse,” the FCC said in a statement.