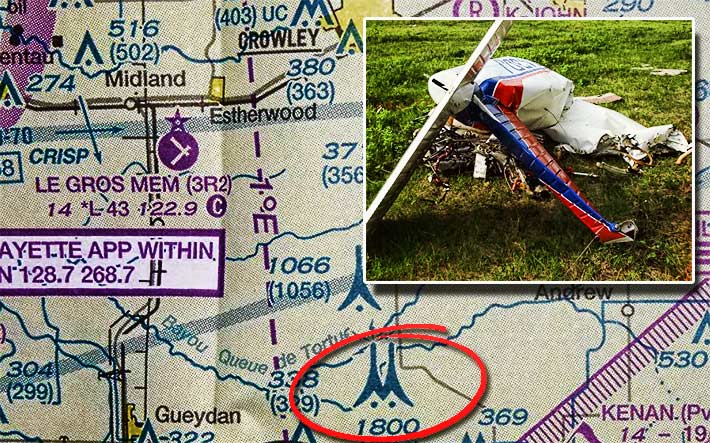 Although the seasoned pilot’s FAA sectional chart identified that there was an 1,800-foot tower in his flight path, he crashed into it at about the 1,600-foot level in daylight. The day before the crash he was informed that there was a warrant out for his arrest.

Scripps Broadcasting agreed to pay a $1.13 million fine to the FCC earlier this month for lighting violations on multiple tower structures.

The settlement order adopted by the FCC started after an agency investigation began after a small plane crashed into KATC’s TV tower near Kaplan, Louisiana on August 31, 2018.

Although the FCC Enforcement Bureau said that it found no evidence to connect the collision to any violation of its rules on the tower, it did say that it found “numerous, sometimes longstanding, irregularities” in compliance and looked at other Cordillera towers that were acquired by Scripps.

At that same time that the FCC was getting ready to send out its press release, the National Transportation Safety Board was buttoning up it’s final report on the crash that was released on January 10, 2020.

It presented a sad picture of a troubled 45-year-old pilot from Seabrook, Texas who died along with his six-year-old daughter.

According to the Vermilion Parish Sheriff’s department:

The airplane departed without a flight plan from Abbeville, Louisiana’s uncontrolled airport and flew about 15 miles to the northwest, where it struck a television tower in a rural area. The tower’s height was 1,793 feet and was marked on his FAA sectional chart at 1800 feet.