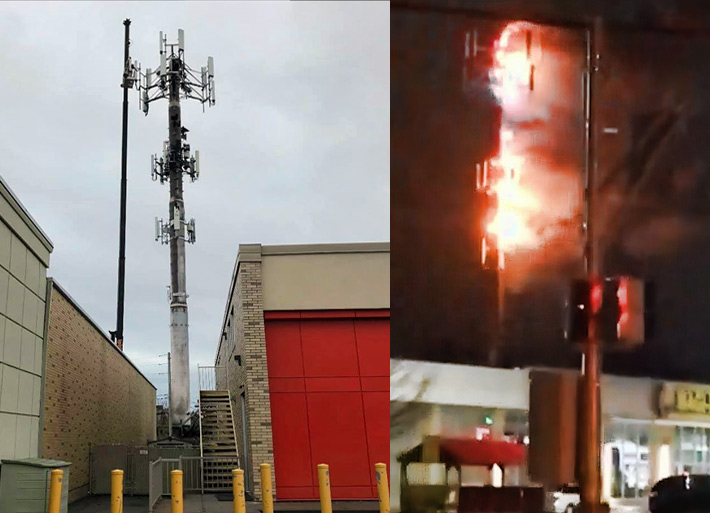 Fire officials in Laval, a city north of Montreal, Canada, have not yet identified whether a multiple-tenant Rogers Communications monopole was purposely set on fire early Friday morning by anarchists protesting misguided beliefs that 5G transmissions are dangerous, although it has been rebutted throughout the world, especially in Canada where a private/public collaboration recently published an excellent report to dispel 5G myths.

Rogers said the Laval structure’s tenants were transmitting 3G and 4G and the 90-foot monopole was completely destroyed.

“The safety of our teams, customers and communities is of the utmost importance to us and we are thankful no one was hurt,” a Rogers spokesperson said in a statement. “We are working with local authorities as they investigate.”

TELUS, a tenant on the tower, said they were able to optimize nearby equipment to ensure they continue to private critical 4G LTE service to the area.

Police were patrolling the area when they noticed smoke coming from the structure.

Prior to the fire, the National Capital Institute of Telecommunications said that a U.S. law enforcement agency had advised that anarchist groups were using social media to encourage acts of sabotage, specifically calling for an “International Sabotage Day” on April 30.

According to the information received, a group called Anarchists Worldwide referenced Canada in the post “So-Called #Canada: Opportunity in Every Crisis – A Call For Decentralized May Day Actions“. With a large number of followers worldwide, the group has the potential to influence individuals or groups to carry out acts of sabotage or vandalism against targeted sites.

Communications workers, carriers and companies were encouraged to remain vigilant and to report any suspected activity to local law enforcement and the Royal Canadian Mounted Police’s Suspicious Incident Reporting (SIR) system at sir-sis@rcmp-grc.gc.ca.