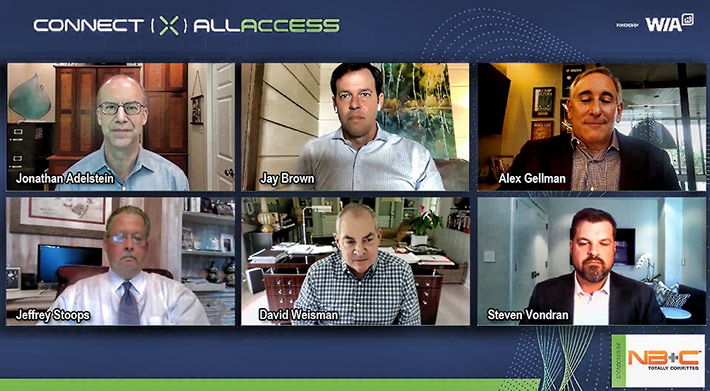 Executives gave upbeat assessments of the tower industry on the “View From the Top: Tower Executive Roundtable,” moderated by Jonathan Adelstein, President and CEO of the Wireless Industry Association during its virtual Connect (X) All Access conference yesterday afternoon.

The towerco executives said that they have been weathering the COVID19 pandemic and believe that there will be no serious supply chain problems.

They also lauded FCC Commissioner Brendan Carr’s plans to clarify the agency’s rules for upgrades on existing towers and other wireless sites.

The virtual format allowed viewers to ask the panelists questions that were answered in real time during the session, allowing for a more personalized presentation and an awareness of subjects not discussed.

QUESTIONS AND ANSWERS FROM THE C-LEVEL EXECS

Impact of tribal tolling
What are your thoughts with the tribal tolling for Section 106 consultation and it’s impact to timelines both short term and potentially long term? by Adrian Berezowsky

Adrian–we would like to see the timelines for all stakeholders’ responses under Section 106 to be harmonized and shortened as appropriate, but this is a complicated issue, and we are thankful to have the FCC to help navigate this as an industry by Steve Vondran

To Craig, That number is too high. Don’t know exactly what it is, but it is not that high. by Jeff Stoops

Responding to jurisdictions regarding negative feedback
With the complexity of 5G adding in additional Tower sites, IDAS, ODAS and rooftops how are the major carriers/towers poised to respond to local jurisdictions with negative feedback with 5G and stealthing/hiding antenna and tower footprint? by Steven Smith

Steven, thankfully, we’ve received tremendous support as an industry from the FCC. WIA has been a critical part of articulating this need. We’ll get it done by being good partners with the communities. by Jay Brown

Don’t believe shared infrastructure will be big in the US in terms of spectrum, radios or antenna. Our customers are too competitive. by Jeff Stoops

Hey Chad – I think it will be in Q3 but might be more like Aug/Sep than July. by Alex Gellman

Mike, we’re making progress everyday with municipalities. Tower coverage has taken more than 2 decades and we’re still working at it. Small cells are an important part of 5G networks and the build-out will take many years. by Jay Brown

Plans for implementing 5G in office buildings
Thank you all for this round-table! A lot of great info here. A quick question for anyone, is there a plan for the implementing 5G in office buildings? Whether it is upgrading existing DAS/Small Cells or installing new DAS/Small Cell on a building by building basis, will there need to be a hardware upgrade from LTE to 5G for in-building mobile solutions? by Brandon Crawford-Braun

Brandon – the plans and discussions I have seen around in building are focused on CBRS. Little talk about 5G in-building right now. I would assume 5G will be deployed as an upgrade in venues (stadiums, casinos) but most other buildings don’t have 4G today. by Alex Gellman

Brandon, The office building and enterprise venue in building present more and more a solution by the building owner and tenants as a required building tenant service. In building deployments will in all likelihood use CBRS when finally deployed. The primary issue for the carriers and neutral host providers is who will pay for upgrade required to deploy in such infrastructure in buildings. by David Weisman

Brandon–much like the previous technology evolutions, 5G will require upgrades to existing DAS and in-building systems. We are seeing those deployment plans take shape today. by Steve Vondran

Will consumers see price reductions?
We often hear how innovation increases efficiencies and decreases costs but practically it’s difficult to ever see costs go down for consumers. What’s your perspective on this? by John Rowe

John, I think from a consumer perspective they are getting a ton more for their money than two or three years ago. I know I am. by Jeff Stoops

What can be done to address cell tower fires?
Hearing reports from different parts of world, some are relating 5G to COVID-19 virus and setting cell towers on fire and harassing workers in the field. Have you seen any issues? what can/should industry/D.C. do to address the issue? by Ric Prentiss

Thankfully no issues here in the US or our international markets. Ric – We need continued industry commentary refuting this crazy thought, but the problem is that it requires disproving a negative so people will be able to run with the belief with absolutely no proof. by Jeff Stoops

Ric–thanks for the question. At this point, we have not seen any issues with respect to our towers, but we are watching it. We’ve seen the recent news and are hopeful that the news cycle and information being shared will outpace the misinformation. by Steve Vondran

Jeff, the RF doesn’t change although we’d expect there will be some additional spectrum bands that are used in 5G compared to prior generations. For the carriers, 5G reduces network congestion and greater remote adjustments to the network. As consumers, we will see faster speeds and lower latency. by Jay Brown

Ahmet, It would be hard to put a number on that at this time, but we’re in the early phases of what will be a multi-year deployment. by Steve Vondran

Ahmet, When you refer to: 5G antennas, it will depend on what frequency bands are being used by each carrier and in which market and site. For example, 5G means 2.5 Ghz; or 600 Mhz or mwave or C band. Agree with Steve, very early stage of deployments and a great deal to go. by David Weisman

Dave, in the past, FCC action has been really helpful to our industry. It gives clarity to cost and timelines. I’d expect that the vast majority of communities will comply. by Jay Brown