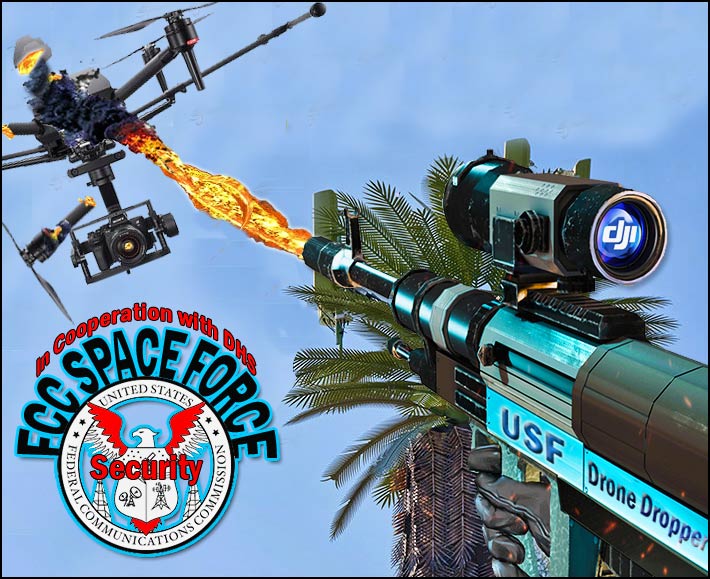 YOUR DJI DRONE MIGHT GO THE WAY OF THE DODO – FCC Commissioner Brendan Carr believes that Chinese drone manufacturer DJI represents a national security threat and he wants the country’s most widely used enterprise drone banned, especially if its use is supported by or aligned with the Universal Service Fund (USF). It is unknown what agency would be responsible for enforcement if a ban is approved and DJI is put on the FCC’s covered list of companies capable of providing sensitive data to the Chinese government.

The Federal Communications Commission voted Tuesday to boot China Telecom Americas off of U.S. networks, finding that the service provider could not quash concerns that it’s beholden to surveillance requests from the Chinese government. The decision means China Telecom Americas must now discontinue U.S. services within 60 days, ending its authorization for the past 20 years to operate in the United States.

Commissioner Brendan Carr also renewed his campaign during the meeting to kick Shenzhen, China-based drone manufacturer DJI out of the country by placing the world’s largest drone provider on the FCC’s covered list of bad actors.

“Various components of the U.S. Government have taken a range of actions, including ground fleets of DJI drones, based on security concerns,” Carr said. “We need a consistent and comprehensive approach to addressing DJI’s threats, so the FCC should take the necessary steps to consider adding DJI to our covered list.”

Last week, Carr said that in July 2021, the Department of Defense stated that it remains convinced that DJI‘s drones pose potential threats to national security, and DJI drones are still banned from use by the DOD.

He said he wanted to ensure that federal Universal Service Fund dollars weren’t being used to purchase DJI drones. He also stated during a national security event that the FCC also has a proceeding underway examining whether to continue approving equipment from entities on the covered list for use in the U.S., regardless of whether federal dollars are involved.

There are alternative resources for Huawei and ZTE equipment, not for DJI’s drones

If the FCC is successful in championing a DJI drone ban, it could further impact broadband development at a time when the FCC and other federal agencies, as well as legislators are becoming increasingly aware of the tenuous nature of wireless contracting due to take it or leave it matrix pricing demanded by Tier 1 companies.

Last year, the FCC designated Huawei and ZTE as national security threats to communications networks and approved a $1.9 billion program to reimburse mostly rural U.S. telecom carriers to remove the banned equipment made by the Chinese companies. The program opens tomorrow for applications through January 14, 2022, from companies with 10 million or fewer customers.

Whereas the telcos have available suppliers that will provide the equipment for the rip and replace program, companies relying upon DJI drones will not be afforded an alternative replacement manufacturer.

DJI’s market share is over 54%, according to a September sector report by DroneAnalyst, but usage of DJI’s drones is considerably higher in wireless development and construction since the company’s 2020 market share was north of 70%

DJI has a stranglehold on the world’s non-hobbyist market since the only alternative is a drone manufactured by Autel which is the next largest manufacturer with a market share of only 7%.

However, it would be likely that they would be the next drone provider to be placed on the FCC’s covered list since they too are a Shenzhen, China-based company that identifies that only ‘some’ of their parts are manufactured in the U.S.

Drone expert Sam McGuire, who is 5×5 Technologies’ Sr. Director of Strategy and also Chair of the NATE UAS Committee and the TIA Drones Ad Hoc committee, informed Wireless Estimator that without additional information regarding how the FCC would structure a blanket DJI ban, he could not address specific issues, but said that the industry would be open to discussions with the FCC and other agencies.

“I believe we should promote a diverse and secure supply chain that powers and protects our critical infrastructure. I’m sure we as an industry will be able to identify and pursue a plan that achieves that while continuing to promote innovation in our space and opportunity for our workforce,” said McGuire.

Five years ago in an article, ETAK Systems CEO Lee Priest said, “We will take tower climbers off the towers. That’s our goal and we expect it to fully occur within five years. We are also looking at remote robots that can climb towers. They can use the safety climb as well as the pegs to get up towers.”

Priest’s prediction fell flat, but during that period, drones have clearly been utilized as the more accurate and primary choice over tape drops, and the collection method provides for a safer workforce.

McGuire said that the value of UAS powered data collection and resulting analytics enables climbers to focus on their highest-value activities.

“Climbers are the lifeblood of our industry.  Our collective goal is to make the climber’s job a lot safer by leveraging new technology to minimize the amount of time spent on-tower,” said McGuire.

“We want to keep our technicians safer and more productive. When we start to see drone data leveraged at full scale, we may also see a whole new approach to deployments and project scoping. We talk with teams every day about new use cases where drone collected data can reduce time on site and reduce cycles for their team members in the back office.”

Engineering firms have found drones to allow them to easily analyze structures and allow them to provide a quicker and more accurate turnaround time for their clients. It would be expected that many of them are using enterprise DJI drones.

Dish Networks is reportedly using drones to view the towers that they’ll be co-locating on to assist them in providing an accurate scope of work and to ensure that they provide the right inventory of materials to the contractor.

According to an individual knowledgeable of drone usage by the towercos, most of them use the UASs for in-house purposes. “Hundreds of them are DJI drones,” he said.

AT&T was the first carrier to employ drones for tower inspections as well as for providing network coverage in disaster areas.

Although it is not known what manufacturers they currently use, a DJI Inspire 1 was showcased in a video they produced to promote their drone inspection program in 2016.

If there is a ban on DJI drones, the industry will find it difficult to find replacements since they may not be available and even if they are, current supply-side chips and other materials have lengthy lead times.

Earlier this month, Aquiline Drones, a manufacturer in Hartford, CT, announced that it laid off nearly half its workforce, blaming the manufacturing industry’s difficulty in getting materials and travel restrictions in the pandemic.

Since all drones that weigh over 0.55 pounds have to be registered with the FAA, the FCC or any other assigned federal enforcement agency would be able to enforce a ban on the use of DJI drones.

“How are they going to prevent me from using my drones?” said one contractor with three DJI drones that his crews use in the field.

“I’ve spent over $6,000 to get these drones and if they want me to stop using them, that’s fine, but they better compensate me just like they’re doing to the carriers that have to get rid of their Huawei equipment.”

If the FAA is tasked with enforcing a DJI drone ban it would be a difficult task because they currently state they have a workforce shortage and their current employees are overburdened.

However, if there is a DJI ban and the contractor’s pilot is caught flying it, the penalties could be crippling. Currently, if you don’t register a drone the FAA may assess civil penalties up to $27,500 or criminal penalties up to $250,000 and/or imprisonment for up to three years.

Since the Biden administration is not averse to heavy penalties for non-compliance with its directives, such as the recently announced company OSHA fine of $13,653 for each employee that is in violation of its vaccination directive, it is conceivable that flying a banned Chinese drone could result in elevated fines and imprisonment.

McGuire said the percentage of wireless contracting and service companies using drones is hard to pin down but he noted that the number of companies leveraging drones for daily operations and analytics is growing every day.

“We’re still in the early stages, but the use of drones is the hottest new trend in the field, hands down. I believe strongly that we’ll look back at this as a time that transformed the way wireless infrastructure does business.”

In his remarks on October 19, Carr noted that since 2017, U.S. intelligence services have warned that DJI poses a security threat due to the level of sensitive information it collects and the risk of that data being accessed by Chinese state actors.  Carr pointed to the following evidence: