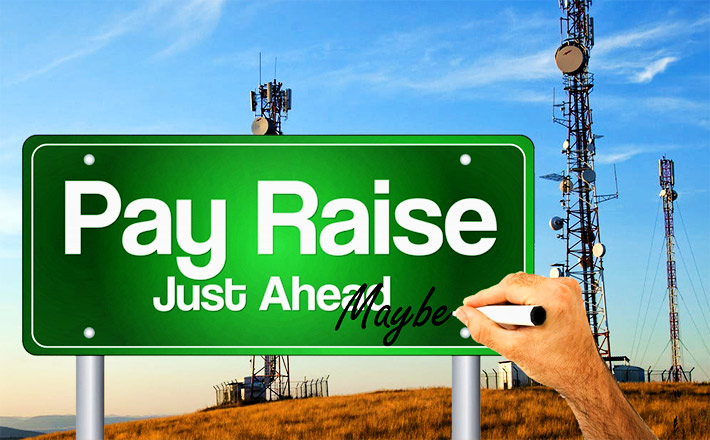 The $1.2 trillion Infrastructure Investment and Jobs Act promises workers will receive ‘good paying’ union jobs by being paid prevailing wages. On Tuesday, President Biden said the Act will provide “great jobs and raise wages.” But it’s unknown whether non-union wireless workers will receive higher wages while building out some of the $65 billion in broadband programs. Several companies have said they will not take on the Act available projects if they’re not compensated adequately for tower techs whose hourly wage could increase to $68 or more based upon prevailing wage requirements.

Since the text of the infrastructure bill was released earlier this month, industry media have been surgically dissecting the limited details in the $1.2 trillion act that provides $65 billion for the nation’s broadband development.

What is known is that $42.45 billion will be funneled to states to fund projects each state approves independently, if their telecommunications provider can offer speeds of at least 100Mbps download and 20Mbps upload, with $14.2 billion going to the FCC’s Affordable Income Fund. The rest going to the Tribal Broadband Fund and other projects.

What is not known nor reported is whether the federally-funded projects under the Infrastructure Investment and Jobs Act will require telecommunications contractors to comply with the Davis-Bacon Act by paying their workers local prevailing wages.

There is a distinct possibility that they might have to, which could result in a wireless contractor with a project in some New York counties having to pay a tower technician an ironworker rigger’s scale of $67.99 per hour plus fringe benefits, according to the New York State Department of Labor’s prevailing rate schedule published earlier this month,

A ground worker installing fiber optic cable would have to be compensated $43.76 per hour plus benefits.

New Jersey might have even higher prevailing wages. One contractor who has completed a considerable amount of prevailing wage projects within the state informed Wireless Estimator that most of the 21 counties have different wage and benefit rates.

“So, if you do a microwave hop across the county line you might have two different rates,” he said, noting that in North Jersey, wages and benefits are approximately $98.00 per hour, whereas South Jersey is at $86.00.

One of many concerns he has is that in New Jersey and throughout the nation, all prevailing wages must be paid weekly, disrupting the normal payroll process.

He noted that  approximately one-third of the total rate is benefits that must be provided or the difference in cash directly to the worker.

Tower techs and other communications workers will surely benefit, and towercos, carriers, ISPs, and other companies taking advantage of state and other funding will be required to accommodate those increased wages.

However, it is likely that clients will continue to pressure contractors to reduce their pricing as they have been doing in the past few years to ensure that they meet their ‘take it or leave it’ OPEX or CAPEX matrix pricing that oftentimes is not able to sustain profitability, causing quality and safety to suffer, as outlined by President and CEO Todd Schlekeway of NATE: The Communications infrastructure Contractors Association during his keynote address at June’s South Wireless Summit.

As much as they would like to see their workers benefit from a temporary well-deserved increase in their wages, four contractors that Wireless Estimator interviewed said that unless their customers can provide reasonable pricing for the funded infrastructure work they would decline it.

“It makes no sense to just pass through payroll if there are no other opportunities for revenue. [President] Biden talks about high-paying jobs in his plan, but he has no idea that contractors will fail if they don’t benefit,” said a long-established New York contractor.

Prevailing wages present a host of hurdles for business owners

Managing prevailing wage projects requires additional administrative costs to ensure compliance. In addition, there are direct costs that will chisel away at profitability, such as increased workers compensation premiums.

If a contractor hasn’t done prevailing wage work before, they may not be aware of regulations such as if you’re prepping and testing antennas and RRUs in your bay in advance of bringing them to the jobsite, that scope most times wouldn’t qualify for prevailing wages.

Then there are the WD-10 wage rate form submissions and the need to know if a foreman spends more than 20% of their workweek doing manual or physical work and many other requirements.

Wireless construction disciplines typically have to match up with other industries

Wireless construction workers in the past few years have been heralded as the individuals that the rest of the nation has to hand off the baton to in order for the country to win the 5G race.

They’ve stood tall behind President Trump in the White House, been lauded by FCC Commissioners and have had great exposure when they are featured in carrier commercials.

There is no classification for a tower technician, a tower tech foreman, winch operator, or many other unique disciplines in wireless projects, putting contractors in a difficult position in deciding what like-kind prevailing wage best matches those workers.

A mid-sized Midwest contractor cautioned, “Depending on your personal selection, the prevailing wage can vary by plus or minus $50.00 per hour making, a huge difference in your margins on prescribed matrix pricing. If audited and the DOL (Department of Labor) determines you selected the wrong wage category, you could owe back wages and penalties that if it went on too long could bankrupt the contractor.”

“There are also prevailing fringe benefits that come to play with DBA wages that can also break the bank if not followed and later caught in an audit,” he said.

In the infrastructure Act, it states: “All laborers and mechanics employed by contractors or subcontractors in the performance of construction, alteration, or repair work on a project assisted in whole or in part by funding made available under this division or an amendment made by this division shall be paid wages at rates not less than those prevailing on similar projects in the locality, as determined by the Secretary of Labor in accordance with subchapter IV of chapter 31 of title 40, United States Code (commonly referred to as the ‘Davis-Bacon Act’)”.

Contractors believe it needs to be acknowledged in advance of letting any contracts that wireless construction fits into one or all of the DBA identifiers of Building, Residential, Highway, or Heavy.

According to the Department of Labor:

Building construction is generally the construction or demolition of sheltered enclosures with walk-in access for the purpose of housing persons, machinery, equipment or supplies. In most cases, broadband work would not apply.

Residential does not appear to be applicable for most wireless contractors unless it involves providing broadband access to a home.

Highway could possibly be considered, but primarily if it involved a comingling of fiber optic work since it could be considered an ancillary character of the project, but it is an area that is not a discipline of most wireless contractors.

Heavy construction is a catch-all for projects not within the other three categories. It includes bridges, drainage projects, water supply lines and other projects, projects that are identified in the Act.

In 1978, “Antenna Towers” was mentioned as an example in a DOL wage schedule memo, so the industry does have some standing, but it needs clarification.

In the White House’s fact sheet, it’s explained that the Act will be:

There was not one word identifying or supporting broadband infrastructure workers’ compensation. The omission is troubling since broadband is the fourth-largest funding allocation in the bill, yet larger and lesser industry expenditures were singled out as benefitting workers by providing good-paying “union” jobs.

According to industry research it is estimated that less than 5% of wireless contractors are represented by unions. Although the Communications Workers of America (CWA) has openly courted employees from larger contracting firms, they have been unsuccessful in their efforts to capture the support necessary for collective bargaining.

This benefits carriers and other key clients who realize how unionization would impact their CAPEX and their reliance upon subcontractors who accept unprofitable contracts to barely remain solvent.

If the CWA tried to get a foothold into wireless construction, companies could model Amazon’s recent success over the Retail, Wholesale and Department Store Union by increasing worker benefits and wages.

Unfortunately,  they can’t when they’re trying to stay afloat with ever-decreasing razor-thin margins.

Will the rip and replace work require prevailing wages?

On July 13, 2021, the FCC finalized a $1.9 billion program to rip and replace equipment from Chinese telecom companies considered to be national security risks.

The program will subsidize the cost for small telecommunications companies in the U.S. to replace gear from firms like ZTE and Huawei to protect the nation’s networks.

Since it’s a federally funded project and the Biden administration has made it known that they want to jump-start the ailing post-COVID economy, it would be logical to ensure that the installation services should be at prevailing wages.

However, there is no documentation in the FCC’s supply chain reimbursement program procedures that can be found that prevailing wages must be paid to eligible workers.

An FCC spokesperson informed Wireless Estimator that the labor pricing in the Final Catalog of Eligible Expenses and Estimated Costs “is based upon the rates that were quoted by vendors and providers to our third-party vendor, Widelity, with whom we contracted to prepare the catalog.”

A follow-up request to the FCC to identify whether or not prevailing rates will be required to be paid to contractors’ employees who perform the work was not returned by press time.

The on background answer that was provided was that it wasn’t required to meet Davis-Bacon Act wages since AT&T was investing about $40 billion into the network over the life of the 25-year agreement.

Wireless Estimator will continue to update the prevailing wage requirements as the infrastructure Act is unpacked.