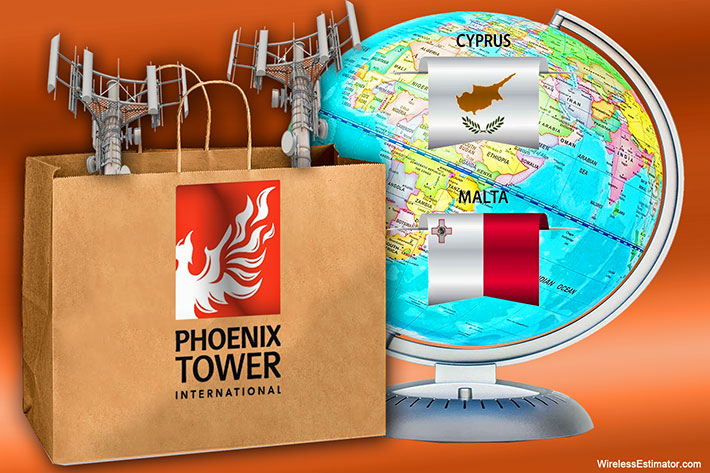 Boca-Raton, FL-based Phoenix Tower International (“Phoenix“) has closed its agreement with Monaco Telecom to purchase over 830 wireless towers and acquire newly constructed wireless towers over six years across Malta and Cyprus through a build-to-suit (BTS) program.

Phoenix is now the largest tower infrastructure provider in both countries and the long-term partnership established with Monaco Telecom through this deal will see the operator occupy the sites for at least 20 years.

In Malta and Cyprus, Phoenix will operate the neutral host independent tower model to facilitate increased coverage expansion for all wireless operators and ultimately increased connectivity for the populations of both countries.

Phoenix also expanded its European footprint in Ireland and France through further tower acquisitions that closed in the last month and are now being integrated into the established operations in each country. This brings the total added, year to date, to 274 sites.

With these latest transactions, Phoenix owns and operates 4,285 wireless infrastructure tower sites across Europe in Ireland, France, Italy, Malta, and Cyprus, making it one of the largest owners of wireless towers across the region.

“We have grown our presence in Europe rapidly and have established operations in five countries in less than two years. It is a testament to the speed and flexibility with which we can approach acquisition and partnership agreements and set up local operations that will ultimately improve wireless coverage and connectivity for citizens across nations,” commented Dagan Kasavana, Chief Executive Officer of Phoenix Tower International.

“The global telecommunications industry is expanding,” added Kasavana. “Phoenix Tower International is well-positioned operationally and financially to support and accelerate this growth and we’re poised to see the continued ongoing expansion of our business across all markets in the coming months and years ahead.”