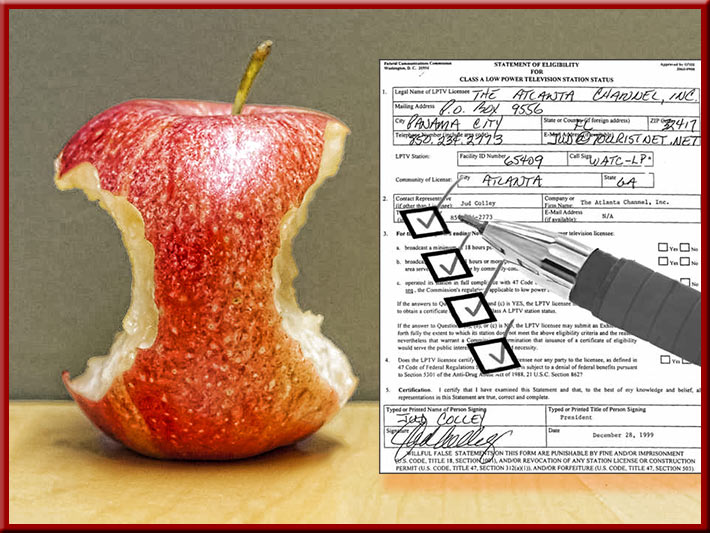 In his motion filed Monday in opposition to a new trial on damages awarded to Atlanta Channel, Inc., attorney Henry A. Solomon said, “ACI’s motion seems designed merely to take a second bite at the apple, by relitigating the same issues and revisiting strategic litigation decisions made by counsel at trial.” In February, Solomon was ordered to pay $520,000 to ACI for botching an FCC license application because he didn’t check four boxes.

A Georgia broadcaster was awarded $520,000 in damages on February 16 following a trial on its claim that an outside attorney botched its federal license application for a Class A low power television station statement of eligibility. The malpractice award stemmed from an incomplete application that would have been acceptable to the FCC if four boxes were checked.

However, The Atlanta Channel, Inc. (ACI) believes it should have received a higher award and filed a motion for a new trial.

Attorney Henry A. Solomon doesn’t want to pay more than the jury’s verdict in ACI’s favor that said ACI was entitled to damages of $455,000 for harm to the value of the WTHC license and $65,053 for costs associated with remedying the FCC’s dismissal of the statement of eligibility, such as attorney and lobbying fees.

In his motion filed Monday in opposition to a new trial on damages, Solomon said, “ACI’s motion seems designed merely to take a second bite at the apple, by relitigating the same issues and revisiting strategic litigation decisions made by counsel at trial.”

In the malpractice lawsuit filed in October 2015, as reported by Wireless Estimator, Florida Corporations Beach TV Properties, Inc. and ACI, affiliates with joint ownership, it was alleged that the botched incomplete filing cost the companies to lose $20 million.

The complaint stated that Solomon submitted the one page eligibility statement signed by ACI’s president, Jud Colley but it did not have four boxes checked off when it was submitted on Dec. 29, 1999.

Solomon then filed an application for review by the full Commission and was informed on November 8, 2012 that the FCC’s staff was correct in their denial.

On December. 7, 2012, an attorney with the Garvey Schubert Barer firm filed a petition for reconsideration of the FCC’s action of November 8, 2012

On October 7, 2014, the FCC denied the petition, stating, “The Atlanta Channel’s initial Statement of Eligibility lacked any information supporting eligibility, and its corrected statement was untimely.”

On September 23, 2015, the Court of Appeals for the District of Columbia affirmed the FCC’s denial of a Class A License for the WTHC-LP License.

Prior to the trial, ACI asked the court to admit deposition testimony from Vince Castelli, businessperson in the television industry who approached ACI about buying an interest in a permit for an LPTV station in Atlanta.

ACI said that Castelli’s testimony about the value of his proposed station is admissible as a lay opinion.

The court said Castelli’s testimony estimating the value of his construction permit is equally admissible.

“Lay reasoning underpinned his valuation. He relied on personal observations from more than thirty years in the television industry to come up with baselines about what certain station features were worth. Castelli then compared those baselines to his own station’s characteristics to estimate the station’s value. It does not appear from his testimony that he used a methodology or pricing model known only to television industry specialists. Because Castelli drew on his personal experiences to price his station, he is like the ship repair company officers who appraised the value of their company’s services based on their ‘years of experience,’ the executive who estimated the cost of a store redesign based on the projects he had overseen, or the company president who testified about the worth of his company’s missing computer files based on how much he knew he would have to pay employees to replace them,” District Judge Rudolph Contreras wrote in his September 17, 2021 decision.

However, Judge Contreras said Castelli’s deposition testimony “did not adequately establish that he had enough personal experience with Class A licenses to opine on their value. No doubt, Castelli has extensive industry experience. But with respect to Class A licenses specifically, he does not seem to have the ‘particularized knowledge’ that comes only from working with something day in and day out.”

“Because Castelli’s opinion about the value of his proposed station is based on his experience as a businessperson in the television industry rather than technical or specialized expertise, it is admissible as lay opinion. Nevertheless, Castelli has no particularized knowledge of Class A licenses, so his opinion on the value of a Class A license will be excluded. ACI’s motion in limine is thus granted in part and denied in part,” Judge Contreras ruled.

In Monday’s filing, Solomon said, “The jury award was within a reasonable range given the evidence, and there is no evidence that the jury engaged in speculation or other improper activity. The jury deliberated for a full day. It was for the jury to make credibility determinations as to the two valuations estimates advanced by ACI’s expert, Stephen Sloan, namely his estimate based on pre-auction option value, and his estimate based on the ‘reverse auction choices.’ The defense damages experts, John Sanders and Susan K. Patrick, made strong attacks on Sloan’s valuation methods, in particular that they were speculative and did not represent fair market value.”