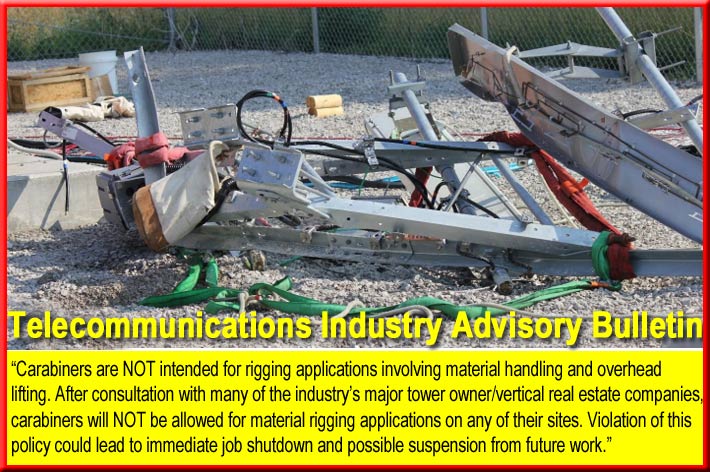 This accident that killed a tower tech in 2014 was originally due to what crew members said was a shackle failure, but the Kentucky FACE report believes it was a carabiner failure that caused the fatality.

NATE’s July 20, 2022 industry advisory bulletin that carabiners are not intended for rigging applications involving material handling and overhead lifting saw a slew of Facebook comments in the past six days that had some posters defending the use of carabiners for those purposes that are largely prohibited by major tower owners whose structures tower techs are erecting or providing installation services on for tenants.

The notification came after the Communications Infrastructure Contractors Association received numerous calls and emails regarding an article by a safety training company on LinkedIn, stated that the ANSI 10.48 standard allows carabiners to be used if they are “specifically classified by the manufacturer for lifted loads.”

It further stated that “…interpreting that verbiage; carabiners need to have ABS MBS, WLL, or FS for use.”

A reader emailed Wireless Estimator, taking issue with promoting carabiner use through what they thought was an inaccurate or questionable interpretation of the ANSI 10.48 standard.

“The mechanical engineering industry that writes the standards for rigging – ASME – does not include carabiners in their rigging hardware. Why would A10.48 allow them to be used when the engineering rigging experts don’t?” they said.

The ANSI/ASSE 10.48 standard cautions the industry that “No one but the A10 Committee (through the A10 Secretariat) is authorized to provide any interpretation of this standard.”

When asked in 2017 whether ASME B30.26 covered carabiners used for construction applications involving load-handling activities, B30 Committee Secretary Kathryn Hyam, P.E., replied: “No. Carabiners are not covered by ASME B30.26.”

B30.26 applies to the construction, installation, operation, inspection, and maintenance of detachable rigging hardware used for load handling activities, the ASME states.

Although there were many well-presented comments regarding the use of carabiners, one of the more constructive Facebook posts said, “Based upon the use case, carabiners may or may not be used. When rigging for material handling, carabiners are not to be used, because of the ASME B30.26 standard. ASME B30 does not test carabiners for lifting. ASME B30 does not rate for shock loading – as that is not allowed for material lifting hardware – PPE is a different matter. There are applications that carabiners can be used, Fall Protection, Controlled descent, straight line, used in accordance with the proper standards and regulations for Fall Protection. Due to incidents in the industry, and fatalities while using carabiners in material handling and overhead lifting, MANY owners, do not allow the use of rigging carabiners on their sites. It’s a fair statement to say, check with your client, before you or your crews use them. No scare tactic. It’s their policy, and I believe the men and women in the field should be aware of that statement.”

Concerns about using carabiners for lifting loads have been well-established over the years and have been reported in Wireless Estimator.

In 2007, a tower tech died after being struck by a falling boom in Mississippi when a carabiner being used for lifting broke, nearly severing his right arm. His co-workers tried to put his arm in place as best as they could and he was transported to a hospital where he later died of head injuries.

In 2013, also in Mississippi, two tower techs died when a jump line block that was rigged by using a carabiner that was subjected to considerable flexural loads failed.

In 2014, a tower tech died, this time, as first reported by the on-site crew, due to a shackle failure that caused an antenna array being lifted to crash down, then the cables amputated the tech’s head and right arm. However, after a detailed investigation that involved a four-day search, which included metal detectors, the shackle was not found, but a broken carabiner was found, and authorities believe it may have been used in place of the shackle and used in the wrong spot. The FACE investigation is available here.