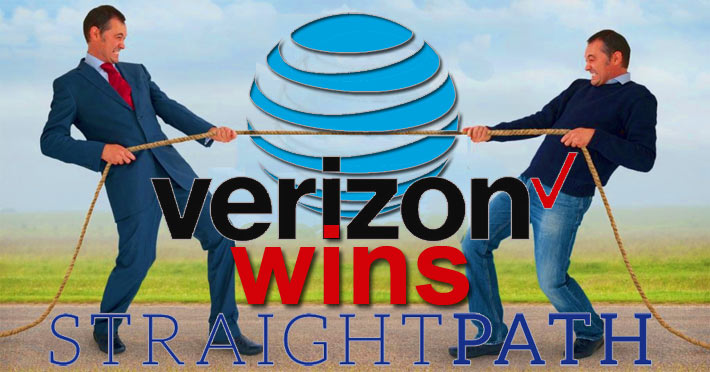 Straight Path also announced that it will terminate the previously announced definitive agreement and plan of merger with AT&T Inc. and Switchback Merger Sub Inc., dated as of April 9, 2017

Update: May 9, 2017 – Straight Path said yesterday it has received another sweetened offer from an unnamed suitor that values the spectrum-rich company at $3.1 billion, again labeling a competing bid “superior” to AT&T’s April 25 first offer as a bidding war heats up.

All media is relying upon one source identified by Reuters stating that Verizon is behind the bidding tug of war.

Under the AT&T agreement, Straight Path is required to pay a $38 million termination fee to AT&T if the Straight Path Board terminates the AT&T Merger Agreement.

AT&T has been given until May 10 to top the current offer.

Update: May 3, 2017 – The bidding war got a little hotter today when Straight Path announced that its mystery bidder has submitted a revised purchase offer amounting to $2.3 billion, upping it’s previous per share price of $104.64 to $135. AT&T’s original bid was $95.63 per share.

April 25, 2017 – Straight Path Communications Inc. announced today that its Board of Directors has determined that an unsolicited offer from a “multi-national telecommunications company” to acquire 100% of the issued and outstanding shares of Straight Path for $104.64 per share, a higher bid than Straight Path’s previously announced definitive agreement and plan of merger with AT&T Inc.

Under the terms of the AT&T agreement, AT&T said it would acquire Straight Path in an all-stock transaction in which Straight Path stockholders would receive $95.63 per share, $0.2 billion higher than the bid that is reportedly from Verizon, according to two financial journals.

However, headquartered in Basking Ridge, N.J., Verizon is not considered a multi-national telecommunications company and may not be the company offering the higher bid.

In a statement, Straight Path said it has notified AT&T alerting them that they have the option for the next five business days to negotiate a possible amendment of that agreement to match or exceed the current unnamed bidder’s offer.

However, the new bidder has agreed to pay the termination fee to AT&T on Straight Path’s behalf.

In January, the Federal Communications Commission’s Enforcement Bureau announced a settlement valued in excess of $100 million with Straight Path to resolve an investigation of Straight Path’s failure to deploy wireless services as required under its FCC spectrum licenses.