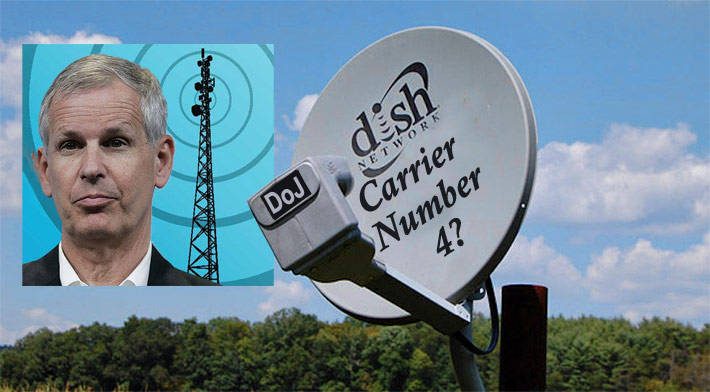 Dish Network might play the pivotal role in the Department of Justice’s approval of the proposed T-Mobile/Sprint merger after The Wall Street Journal reported that Dish is the lead bidder on the spectrum T-Mobile and Sprint are divesting in their bid of winning regulatory approval for their merger valued at $26.5 billion.

Charlie Ergen, who controls Dish, has approximately $10 billion to finance the nation’s fourth network. In addition, Dish owns more than $12 billion of unused spectrum and has to start deploying it by 2020 or the company will have to return the spectrum to the FCC.

However, that requirement could be initially satisfied by Dish’s planned construction of a nationwide Internet of Things network.

Last October, Chairman Ergen said during a investor’s conference that Dish would spend up to $10 billion building 50,000 towers to launch a new network. Industry observers panned that plan since it would be impossible to get siting for the structures in any reasonable time frame.

On Friday, The New York Times said the DoJ was getting closer to approving the merger and it could be settled by next week. If the department does consent to the merger it would weaken an effort by attorneys general from nine states and the District of Columbia to stop the merger with their lawsuit filed on June 11.

The deal also requires approval by the FCC, but FCC Chairman Ajit Pai and his fellow Republican Commissioners have signaled support for the merger.

If Dish becomes the fourth carrier, the immediate need for thousands of co-locations would benefit vertical realtors, but it might not need a full complement of 50,000 sites.

Both carriers previously said the combined company would decommission 35,000 macro towers – most of them likely to be Sprint sites – and would only add 10,000 new towers in the coming years as well as approximately 50,000 new small cells.

Even if Dish were to acquire the Sprint sites, and only 10,000 new locations had to be built, It would still tax the current wireless workforce that needs to expand in order roll out 5G networks.

An ancillary benefit to contractors could be a sorely-needed increase in margins since Dish might have to provide higher model pricing in order to build out their network, said one wireless contractor.

Dish executives met last week with the DoJ’s antitrust chief Makan Delrahim and Pai on the government’s review of the merger.

A federal filing on Friday identified that Ergen was among the executives who attended the meeting and the firm “discussed its opposition to the proposed merger of Sprint and T-Mobile as currently constructed.” Dish also “explained the need for a minimum of four nationwide mobile networks.