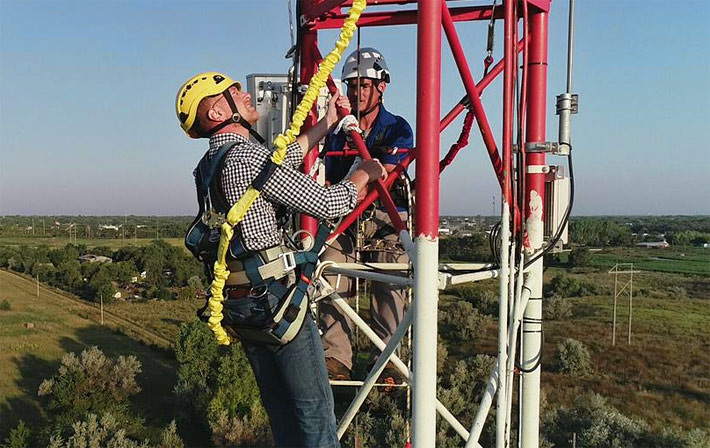 Last month, South Dakota picked up a monumental $705.5 million out of the FCC’s $5 billion rural broadband funding. And yesterday, FCC Commissioner Brendan Carr was in the state getting an elevated view as to how those funds will benefit rural America.

Carr climbed to the 100-foot level of a 330-foot guyed tower in Mitchell to view first-hand the installation of high speed internet equipment being installed by Vikor Teleconstruction for broadband provider Midco.

The Commissioner has been the FCC’s point man on ensuring that America is working to bridge the digital divide.

He’s also an advocate of expanding the workforce for wireless infrastructure.

A possible career change for Carr?

Carr has frequently stated that the industry needs another 20,000 tower climbers to meet 5G installation requirements, but neither he, the FCC nor industry associations can document the source for that headcount, although it is well-known that there is a shortage of tower crews.

Carr has the most climbing experience of any other FCC Commissioner, having ascended multiple towers throughout America. His highest climb was on the mast of a 2,000-foot guyed tower last October in South Dakota, dwarfing FCC Chairman Ajit Pai’s 130-foot self-supporting tower climb two months earlier in Colorado.

So, could Vikor persuade Carr to become a full-time tower climber and reduce the shortage to 19,999? Possibly, if they could afford to entice him with an hourly rate considerably north of $300.

However, if Vikor’s HR director wanted to verify Carr’s current salary, they can’t. He is one of over 250,000 federal workers whose salaries the U.S. Office of Personnel Management redacts from public view.