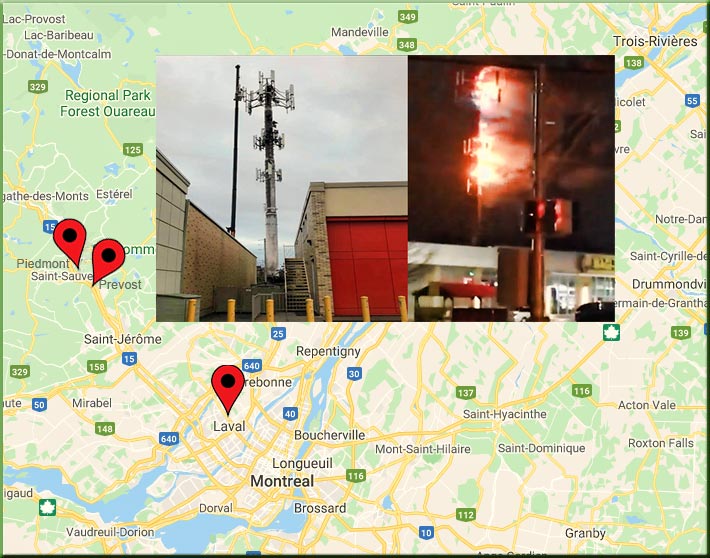 Since Friday, three cell towers have been set ablaze in three towns near Montreal. The Laval fire (inset) destroyed a Rogers Communications monopole.

This morning’s fires are also being viewed as “suspicious” by authorities. Firefighters were first called to a cell phone tower fire in Piedmont at around 3:40 a.m. Approximately 20 minutes later, firefighters were called to respond to a second fire in Prevost.

Speaking to reporters today, Deputy Prime Minister of Canada Chrystia Freeland and Federal Health Minister Patty Hajdu said the acts, believed linked to theories that 5G cell towers are responsible for COVID-19, represent a need for public health officials and elected politicians to do a better job disseminating accurate information about the virus, although a private/public collaboration recently published an excellent report to dispel 5G myths.

A spokesperson for the Canadian Wireless Telecommunications Association (CWTA) informed Wireless Estimator this afternoon that the incidents are under investigation.

“If it is determined that vandalism was involved, such acts are both senseless and dangerous, and only serve to  deprive Canadians of critical communications services during already difficult times,” the representative said.

Regarding the 5G/COVID 19 conspiracies, they said while they are not aware of any connection to these incidents, these conspiracies have been widely debunked and have no scientific basis.