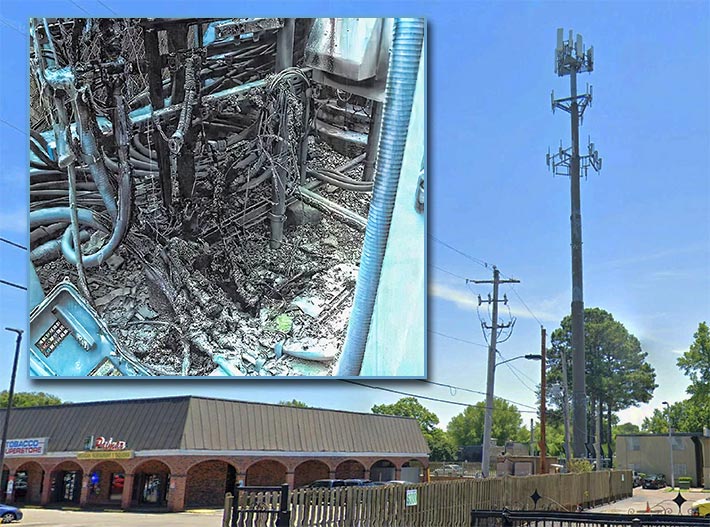 A roaming arsonist caused $75,000 worth of damage at a Crown Castle site in Memphis, Tennessee on February 17. On January 28, another site (inset photograph provided by Memphis Fire Department) was torched, causing approximately $500,000 in damage. The structure’s owner has not been identified.

A 145-foot Crown Castle monopole site had equipment damaged by fire on February 17, 2020 in Memphis, Tennessee, and Memphis fire officials are stating that it appears to have been intentionally set, causing approximately $75,000 in damage at the 4087 Summer Avenue site which is surrounded by apartments and a shopping plaza.

Although the fire was first reported about 11:00 a.m., no witnesses have come forward to provide any information.

The Memphis Fire Department is also investigating three additional fires at cell sites, the first one causing $5,000 in damage at a Neil Street tower on December 5, 2019.

On the same day a Faxon Avenue tower saw $10,000 in damage caused by the arsonist.

The city’s most expensive tower site damage from a fire occurred on January 28, 2020 at a monopole compound off of aptly named Flicker Street, causing $500,000 in damage, according to authorities.

The owner of that structure could not be identified by Wireless Estimator, and a request to authorities for additional information was not immediately returned.