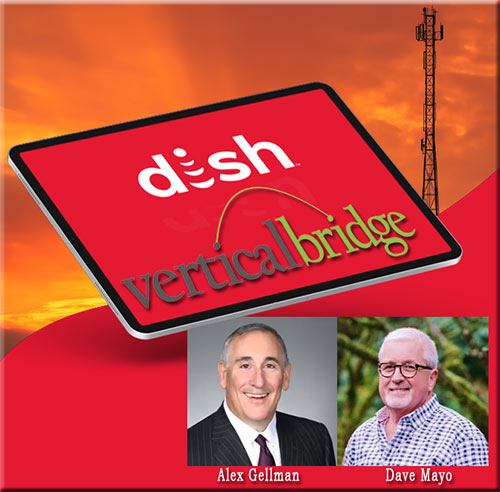 The Vertical Bridge deal comes behind Crown Castel’s agreement with Dish for access to 20,000 of their towers. American Tower Corp. is still looking for its “fair share” of lease-ups and to date SBA has not reached an agreement with Dish.

Vertical Bridge is the nation’s largest private owner and operator of communications infrastructure with a portfolio of over 300,000 sites spread across all 50 states and Puerto Rico.

“As the U.S.’s newest national wireless carrier, Dish is building a truly unique 5G network, and Vertical Bridge is committed to assisting Dish in deploying its network quickly and efficiently,” said Alex Gellman, CEO and Co-Founder of Vertical Bridge. “We are extremely proud to support Dish for its long-term infrastructure needs.”

In a LinkedIn post, Mayo further congratulated Gellman stating, “Great to have done this again with VB! Thanks for making it a painless process. Looking forward to getting our 5G O RAN network deployed with your help”.

Prior to joining Dish, Mayo served as Senior Vice President at T-Mobile.

Last December, Dish signed a long-term agreement with Crown Castle to lease space on 20,000 of the company’s towers.

In May, SBA CEO Jeffrey Stoops said that SBA is “very involved with them (Dish) in all kinds of conversations.” However, no agreement has been announced.

Also in December, American Tower Corp. CFO and Treasurer Rod Smith replied that if you look back in history, there’s never been a nationwide network that’s been built on a single infrastructure provider’s set of assets.

“So, just because the Crown deal is first, I don’t think that means that the other tower companies won’t get even their fair share of lease-up and activity across the U.S. Dish has said that their network is likely to be 50,000 sites or even more,” said Smith.

It’s unknown if Crown Castle and Vertical Bridge will provide all of Dish’s site locations to build out their network.