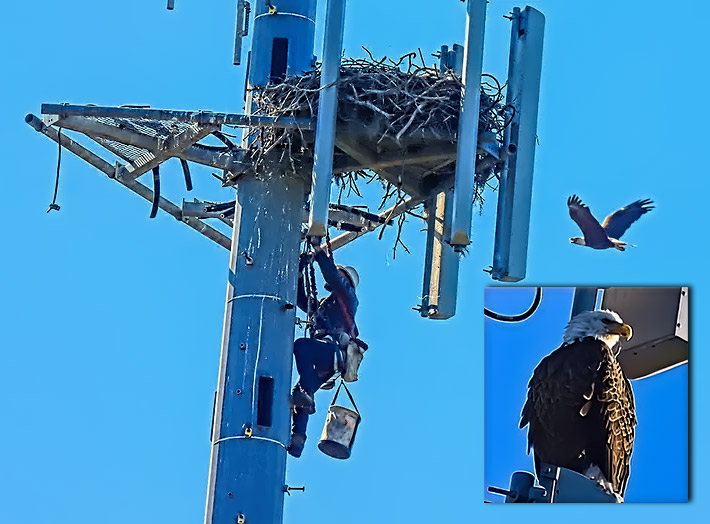 PREVENTATIVE MAINTENANCE – Tower tech Timbob Beauguard climbed a 160-foot Crown Castle monopole in Hudson, Florida, to remove handfuls of fishing line in a nest that could have easily killed or seriously injured two eaglets and their parents, but to get him to their sector frame home took a village, according to Raptor Center of Tampa Bay President Susan Murrah. Photos: Kim Rexrout

When Kathleen Westfall, one of Audobon EagleWatch’s 600 dedicated volunteers monitoring 1,000 eagle nests in Florida, viewed a Bald Eagle’s nest on Plum Lane in Hudson last Monday, she became concerned after noticing a large amount of fishing line in the nest on a Crown Castle 160-foot monopole. 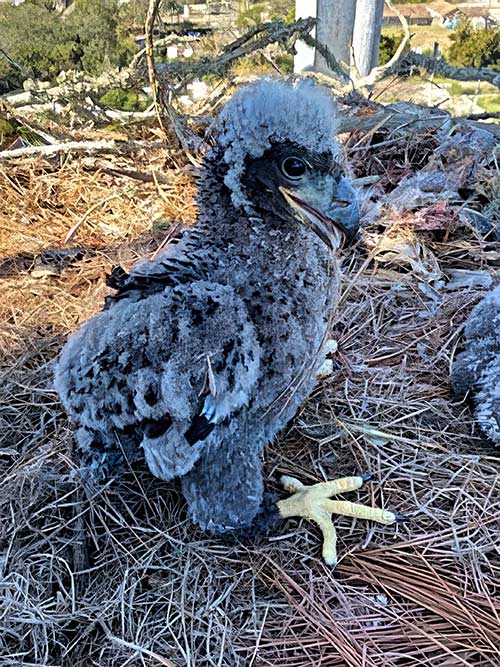 ROOM SERVICE, PLEASE – An eaglet that calls a Crown Castle monopole home was all smiles after the towerco made arrangements to clean a life-threatening fishing line out of its nest. Photo: Timbob Beaugard

She immediately contacted Kim Rexroat, a director at Raptor Center of Tampa Bay, Inc., who teamed with the non-profit’s president, Nancy Murrah, to put a plan together to remove the filament that could quickly kill or seriously injure two eaglets in the nest as well as their parents.

Although federal and state bureaucracies are often layered with procedures that can delay urgently required permissions, Murrah informed Wireless Estimator that the U.S. Fish and Wildlife Service and Florida Fish & Wildlife Conservation Commission acted immediately to provide a permit to approach the nest the following morning.

Crown Castle quickly made arrangements for members of wireless infrastructure contractor Dynamic South, Inc. of Saint James City to assist in the removal of the fishing line.

Murrah said that tower tech Timbob Beauguard and Dynamic South representative Jon Stott were on-site within two hours. Beauguard ascended to the nest, where he removed a considerable amount of fishing line and searched for hooks.

Volunteer Rexroat, who had driven over 11,000 miles to help birds last year, stayed the entire day at the nest, making sure if there was anything wrong with the eaglets, they could be quickly transported to an avian veterinarian.

Rexrout witnessed the parents returning to the nest and feeding both eaglets. 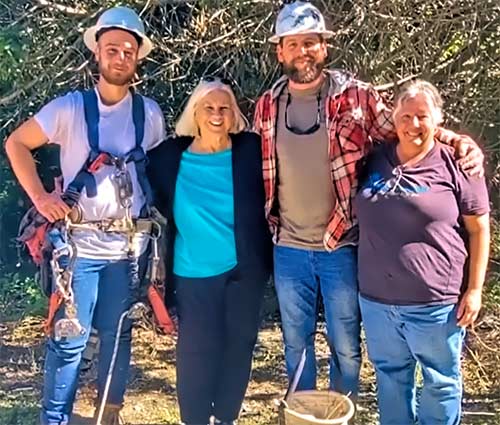 LOVING IT WHEN A PLAN COMES TOGETHER are (from left) Timbob Beaugard, Kathleen Westfall, Jon Stott, and Kim Rexrout.

Murrah said that the eaglets were about 3-1/2 weeks old. She was genuinely appreciative of all of the individuals and organizations that came together in a coordinated effort to ensure the continued safe soaring of eagles.

Additional information about the Raptor Center of Tampa Bay is available here.

Recently, a tower crew removed a bald eagle’s nest in South Carolina without a permit, initiating a federal investigation.

During December, another interagency effort provided an impaled Bald Eagle the ability to fly to its rescuers. Unfortunately, the eagle died shortly after its rescue.

Bald Eagles’ nests are found about 50-120 feet off the ground with an average depth of about 2-4 feet and a diameter of about 6-10 feet. The largest recorded Bald Eagle nest was located 60 miles south of Hudson in St. Petersburg. Located in a tree, it weighed almost three tons and was 20 feet deep and 10 feet in diameter.

Although they were removed from the federal list of Threatened and Endangered Species in 2007, Bald Eagles and their nests are still protected by both state and federal laws