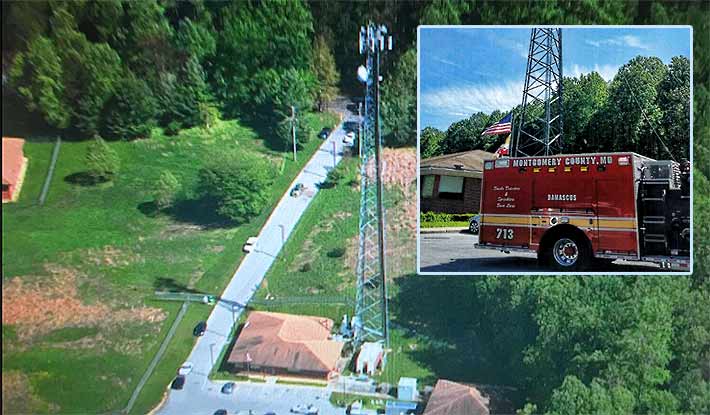 A tower tech fell to his death in Maryland (above) and another technician was electrocuted in North Carolina.

A service will be held at 1 p.m. Mon., May 23 with burial to follow at Floral Park Cemetery, Indianapolis.

He was a 2009 graduate of Monrovia High School and enjoyed music, both singing and playing the guitar.

UPDATE: May 17, 2016  – A Montgomery County Maryland police official has informed Wireless Estimator that the deceased worker who fell off of a tower in Damascus, Md. was 25-year-old Daniel Patrick Harrison of Indianapolis, Ind. The public information officer said that Maryland Occupational Safety & Health (MOSH) was investigating the fatality.

Harrison, employed by Marali Telecomm Systems, Inc., had been working on an AT&T project being managed by turfing vendor NEXIUS.

In addition, the still un-named worker who was electrocuted in North Carolina, was an employee of RH Construction, according to information obtained by Wireless Estimator. That incident is being investigated by North Carolina Occupational Safety & Health (NCOSH). A spokesperson said they could not provide any additional information until their investigation was completed. North Carolina has its own Communication Tower Standards as does Michigan.

The two fatalities raises the industry count to three in 2016.

Two tower technicians were killed yesterday afternoon in work related accidents that are currently under investigation by authorities.

A tower climber fell from a self-supporting structure in Damascus, Md. and another technician was electrocuted in Wadesboro, N.C.

According to Montgomery County Fire Rescue Services public information officer Pete Piringer, the worker was on a cell tower at the Washington Suburban Sanitary Commission (WSSC) wastewater treatment plant when he fell at approximately 2:40 p.m.

The worker’s name is not known at this time.  The 212-foot tower, built in 1997, is owned by the Washington Suburban Sanitary Commission, according to FCC records.

The firm’s president, Joe Mendoza, said this morning that his deceased employee had worked out of their Indianapolis, Ind. office. He said that he had no further details regarding the fatality.

According to Marali’s web site and other published information, the company has been serving the industry since 1987, and in 2014 they entered the telecommunications construction field, opening offices in Ind., Tex., Nev., and Calif.

The worker’s name that was electrocuted in N.C. has not been released by authorities.

According to individuals knowledgeable about the incident, the technician was reportedly rigging matting to be loaded onto a boom truck that used it to decommission an SBA Communications tower when the truck’s operator came in contact with an overhead power line at about 2 p.m.

The decommissioned tower had already been removed from the site and workers were getting read to leave the property.

The worker’s employer is not known, but  two companies were on the decommissioning project.